Do Leicester’s injuries enhance their chances of finally beating United? All the big tactical questions right here…   1) Will Rodgers’ new... 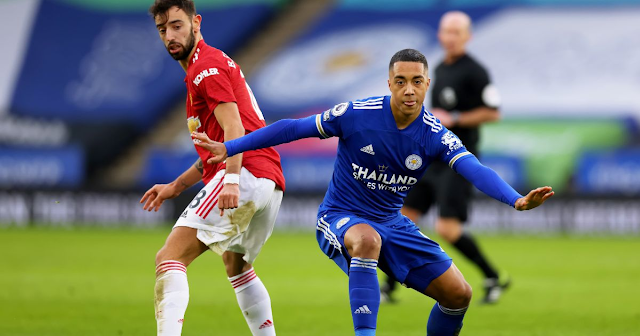 Brendan Rodgers has dealt with the loss of James Maddison and Harvey Barnes to injury by switching to a 3-5-2 formation in which Ayoze Perez plays in a Dele Alli-style No.10 role behind split strikers. This could give Leicester just the impetus they need to end their seven-year wait for a victory over United (more on that later), but just as important is the packing of central defence and central midfield.

In a 3-5-2, Leicester have six bodies compressed through the central column of the pitch, and while the defensive resilience of the shape is yet to be adequately tested (only Burnley, Brighton, and Sheffield United have faced the 3-5-2) it looks like the right shape to stunt Bruno Fernandes. United are invariably flat unless Fernandes has space between the lines to dictate play, and with Leicester’s defence containing a spare centre-back ready to step up the Portugal international might struggle.

Much will depend on his personal battle with Wilfried Ndidi and the extent to which Perez can cut off passing lanes into United’s playmaker.

2) Are Maddison and Barnes’ absences a help or a hindrance?Going forward, Leicester’s new formation is slightly more direct than when Maddison and Barnes are in the team – which could make their absences a blessing in disguise. These two play on the half turn between the lines, consistently making themselves available for sharp vertical passes through midfield; they are the catalysts of Rodgers’ explosive, tempo-shifting football this season.

Without them, Leicester may struggle to counter-attack after long periods of static – but organised – United possession, a common occurrence under Solskjaer that was seen as recently as the West Ham game. If the Foxes don’t have their best line-breaking playmakers, then perhaps they will simply be penned in as Jamie Vardy cuts an isolated figure.

However, it is just as likely that the added directness of the 3-5-2 will help Leicester’s cause. Youri Tielemans and Ndidi will be required to launch longer balls behind the United defence, potentially making them quicker in the transition than in previous matches against United. In other words, the 3-5-2 is a shake-up, abandoning an approach that has consistently failed against Solskjaer’s side.

3) Can Vardy and Iheanacho spread panic in the United defence?Keep an eye on Perez’s role. How he impacts the game is the most intriguing mystery before kick-off, and it may ultimately define the influence of Leicester’s split strikers. Vardy and Kelechi Iheanacho combined twice for goals in the 5-0 defeat of Sheffield United, highlighting the potential disruption of having two strikers equally adept at making runs in behind.

They may cause chaos on the break, particularly if Leicester go for a more direct approach. Solskjaer may look to counter the threat of these two by ensuring one of his full-backs stays deep while United are in possession, forming a back three, but even in this scenario it is likely that panic will occasionally spread. Premier League centre-backs very rarely face split strikers who makes runs on the outside of the centre-backs.

Victor Lindelof in particular is vulnerable to Vardy’s movement. This is the key side, and should Leicester’s No.9 pull Lindelof wide and beat him for pace, then there’s a good chance Iheanacho will be in the right place to finish. 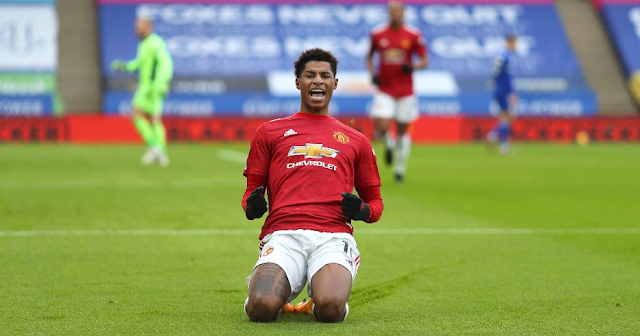 4) Can Shaw and Rashford take advantage of Leicester’s weakness on the right?Man Utd attack predominantly down the left flank; only Aston Villa (45%) and Crystal Palace (44%), who lean heavily on Jack Grealish and Wilfried Zaha respectively, do so more frequently than United (43%). This is partly explained by Marcus Rashford’s and Anthony Martial’s tendency to drift out to the left, partly by a weakness on the right flank (Daniel James lacks technical ability), and partly because of Luke Shaw’s superb season.

Shaw and Rashford can expect to find joy together on this side because, in bigger matches throughout 2020/21, Leicester have shown a weakness at right-back. In the 2-2 draw between the sides on Boxing Day both United goals were built down that side while 66% of all key passes United played were on the left. In defeats to Arsenal, Liverpool, and Everton, Willian, Sadio Mane, and Richarlison were dominant on this flank.

Perhaps deploying wing-backs will help Leicester strengthen in this zone. Certainly Ricardo Pereira’s return to the first team is good news for the hosts, but nevertheless Shaw and Rashford are the Man Utd players to watch closely.

5) Will Tielemans show Solskjaer what he’s missing from midfield?Man Utd games are increasingly difficult to watch. There have been a total of six goals in their last seven matches in all competitions, reflecting the sense that unless Fernandes is in form to conjure a moment of magic then Solskjaer’s system looks flat. He does not appear to coach attacking interplay in much detail, leading to drifting, meandering matches defined chiefly by his solid defensive shape.

The solution to this issue is a revamp of central midfield. None of Fred, Scott McTominay, or Nemanja Matic have the technique, quickness of thought, or risk-taking instincts to break the opposition lines and add some tempo to United’s possession.

This could be just the sort of game in which Tielemans’ brilliance shines through; as he controls the match with elegant, daring passing through the lines, Solskjaer may realise just what his midfield is missing. Not that United actually need to sign anyone this summer. In Donny van de Beek they have exactly what’s needed. Maybe it’s time to bring the Dutchman in from the cold.