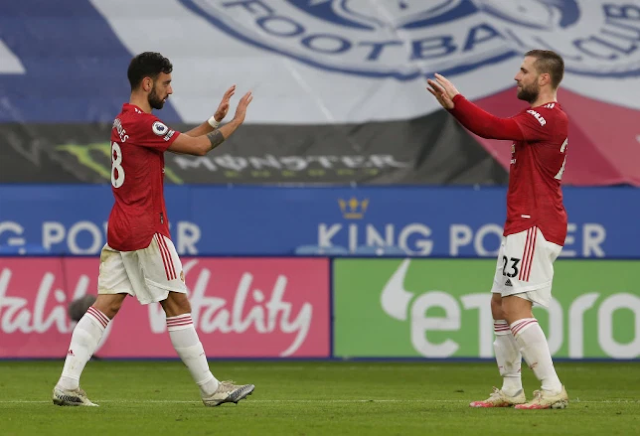 Manchester United star Luke Shaw admits he’s often left baffled by the output of team-mate Bruno Fernandes. The Portuguese playmaker has been a sensational signing for the Red Devils, scoring 34 goals in 61 appearances for the club since his £47million arrival from Sporting Lisbon. Shaw has enjoyed his most impressive campaign to date at Old Trafford and his tally of five assists thus far is his highest since he joined the club in a £30m deal from Southampton in 2014. Fernandes leads the way on 11 and is the club’s top scorer with 22 goals in all competitions this term.

That means the playmaker has contributed 33 goals and assists in his 39 appearances this term.

Fernandes has contributed 33 goals and assists this term.

While Fernandes has been United’s standout performer this term, the playmaker has often contributed even when his displays have dipped below-par. And Shaw admits he’s astonished at Fernandes’ ability to contribute to the side even when he’s not on top of his game. Speaking about the ongoing competition and assist tally, Shaw said: ‘We do talk a bit. ‘But honestly, the guy’s numbers are unbelievable, what he’s doing and how he’s doing it. ‘I said to him [after beating Real Sociedad 4-0]: “Bruno I’ll be honest you weren’t good today but you scored two goals – I just don’t know how you’re doing it.”‘

Shaw came close to leaving the club when Jose Mourinho was in charge, as the pair clashed over the left-back’s fitness issues. The left-back fought back during Mourinho’s final season in charge and he’s gone from strength to strength under Ole Gunnar Solskjaer. But it hasn’t been until Shaw’s recent attacking displays – where he’s provided five assists – that the defender has found praise. Shaw believes that some people are too focused on stats and says he feels valued by people within the club. ‘It’s so true. I was speaking about it with Paul Pogba,’ said Shaw. ‘We were both saying how we think people in football understand the game and how important that player is that doesn’t get many assists or goals. ‘But a lot of the outside world of football is all about stats. ‘It’s understandable because they watch it and they want to see them things but I’ve just got deal with it. ‘I would love the fans to be back so bad because I’m missing the noise. Hopefully I can score soon and I want the fans in to celebrate because the lads were saying it’s not normal when you score.’