Match report as Manchester United stun Manchester City with a derby day win at the Etihad Stadium thanks to a Bruno Fernandes penalty and ... 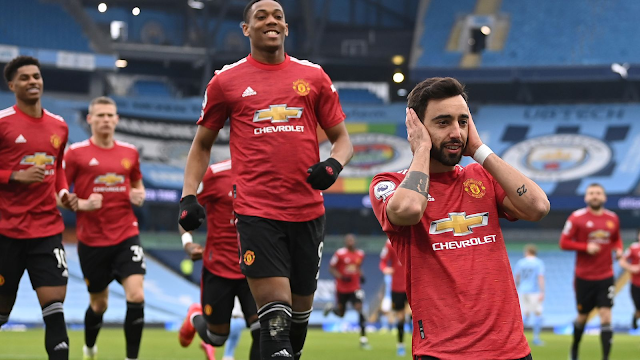 Match report as Manchester United stun Manchester City with a derby day win at the Etihad Stadium thanks to a Bruno Fernandes penalty and Luke Shaw strike, which closes the gap at the top of the Premier League to 11 points

Manchester United ended Manchester City's 28-game unbeaten run with a shock 2-0 victory at the Etihad on Sunday, with early goals in each half from Bruno Fernandes and Luke Shaw stunning Pep Guardiola's Premier League leaders.

United have been criticised for their lack of intent in these big fixtures this season but they were ahead inside two minutes thanks to a Bruno Fernandes penalty, after Gabriel Jesus had clumsily fouled Anthony Martial just 34 seconds in.

City - who had won their last 21 on the spin - assumed control of possession after that and hit the bar through Rodri at the start of the second half but moments later, Shaw drove forwards and finished the move he started to put Ole Gunnar Solskjaer's side on course for a big derby win.

The title remains seemingly out of reach for United, with City's lead shorn to a still-handsome 11 points with 10 games to play, but they took an important step towards Champions League qualification and laid down a marker with this statement win.

City had shut United out in their two previous meetings this season but the visitors got off to the perfect start when, during their first attack of the game, Jesus tripped Martial inside the box.
Fernandes fired his low penalty in off Ederson's right hand and celebrated his 16th goal of the season by covering his ears, after receiving criticism in recent weeks for failing to deliver against top opposition.
City certainly fall into that bracket. They hadn't trailed for a minute of their previous 19 Premier League games but they were rocked by United's early goal and, incredibly, Shaw almost made it two just moments later. The United left-back robbed a dithering Joao Cancelo in the box but his scuffed right-foot shot was comfortable for Ederson.
It was a breath-taking start from United and Marcus Rashford had a sight at goal on 16 minutes, firing straight at the City keeper from just outside the box after some sloppy play from Kevin De Bruyne.

However, City began to gain control from there and, after Ilkay Gundogan bent a shot off target, Raheem Sterling saw a penalty shout rightly waved away, and Oleksandr Zinchenko fired at Dean Henderson.

United's defence responded to the challenge well, though, and, other than a tame Gundogan shot following some neat build-up play, a De Bruyne free-kick needlessly tipped out for a corner by Henderson, and Riyad Mahrez's drive across goal, the visitors made it to the half-time interval without any major alarms.

That changed just three minutes into the second half when Rodri fired against the bar from Jesus' lay-off - but it was United celebrating soon after.

Shaw burst forward with the ball from inside his own half and, after getting the ball back from Rashford in the box, the left-back clipped a low shot into the far corner to put the visitors two clear against their neighbours with just his second-ever Premier League goal.

Sterling went in search of an immediate response but after he fired straight at Henderson, Martial teed up Daniel James for a blocked shot before the France striker headed his own effort at Ederson.

United had their tails up now and on 69 minutes, Martial missed a golden opportunity to make it three. He latched onto a loose ball after good play from Scott McTominay but failed to convert his one-on-one with Ederson.

City sent on Phil Foden and the local lad almost pulled his side back into the game after exchanging passes with De Bruyne but he badly sliced his shot wide with Henderson's goal exposed.

Sterling blew an even better chance with 10 minutes to play, when he completely missed Kyle Walker's cross into the six-yard box, and despite some frantic attacking in the final moments, City weren't able to carve out a better opening, as United held firm.

The result makes it 22 Premier League away games unbeaten for United - but this will be the sweetest of the lot.