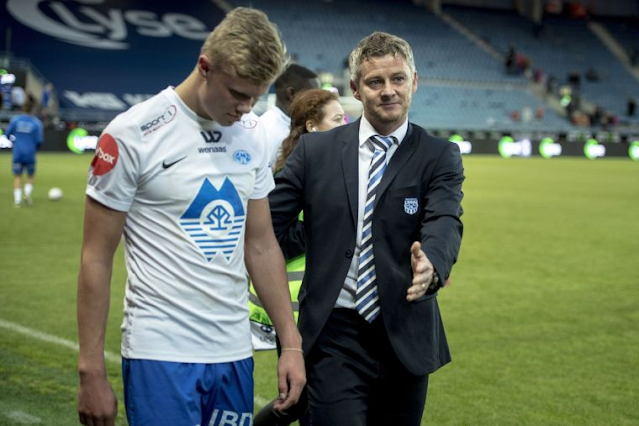 As per the club’s official website, Solskjaer responded with ‘it was just a matter of time’ after Haaland broke his record as Norway’s top scorer in Europe’s elite club competition, with a 20th against Sevilla.

Solskjaer worked with the Borussia Dortmund talisman, who is now their nation’s biggest sporting star at Molde, with the Manchester United boss adding that the achievement is ‘fantastic’.

ESPN report that the 20-year-old phenom is Solskjaer’s No.1 target at Old Trafford. Solskjaer produced a fairly short answer on Haaland’s feat, perhaps in an attempt to avoid transfer speculation intensifying.

Solskjaer stated that ‘whatever’ he wishes to say to Haaland, he will do so in Norwegian ‘directly’ to the centre-forward. An admittance of communication channels that will excite United’s supporters.

Here is what Solskjaer had to say on his former pupil’s historic achievement:

“It was just a matter of time before he scored more goals than me in the Champions League. But at the age of 20, to score as many goals as he has is fantastic.”

“There aren’t many more superlatives that anyone can use. Whatever I want to say to him, I will say in Norwegian directly to him.”

Haaland was already establishing himself as a must-watch and exciting talent at Red Bull Salzburg but has kicked things up since joining Dortmund, quickly becoming a bonafide world superstar.

The Norwegian sensation has scored 47 times in 47 outings for the Bundesliga side, whilst also adding 11 assists. It’s no surprise that many of the world’s elite wish to recruit the ace as soon as possible.