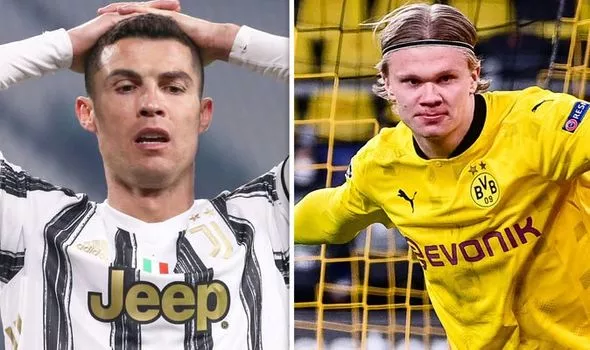 Manchester United have been backed to chase Erling Haaland instead of Cristiano Ronaldo.

Manchester United will not attempt to re-sign Cristiano Ronaldo because they are more interested in buying young talent like Erling Haaland, reckons former Liverpool midfielder Don Hutchison. Ronaldo has been linked with a move away from Juventus after failing to lead the Old Lady to Champions League glory for a third season out of three. The Portugal superstar turned 36 in February but has still scored 30 goals in all competitions so far this season.
Ronaldo left United in 2009 after six years at Old Trafford to move to Real Madrid.

Appearing on ESPN FC's Extra Time on Monday, Hutchison was asked if United and Juve should broker a deal which sees Ronaldo and Paul Pogba swap clubs this summer.

But Hutchison insists United will not have any interest in Ronaldo and will be targeting the likes of Borussia Dortmund sensation Haaland instead.

Hutchison said: "What? Where do these questions come from? Man United are not even thinking of taking Ronaldo, no chance. Not a chance.

"Ronaldo I think is brilliant but no big club is going to take him now.

"I heard rumours he might be going back to Real Madrid - I don't see that one happening.

"So Juve seem quite pleased, he scored a hat-trick at the weekend, bounced back, everything's good. Just let him enjoy his lifestyle at Juve.

"No he's not past it but he's not going to take Man U to where they want to be is he?

"Ronaldo and [Lionel] Messi have been giants of the game for 15 years, you can't be expecting Messi to take Barcelona back to the very all on his own and nor Ronaldo to take Juve back to the top on his own or Man United.

Haaland has scored 31 goals so far in his first full season at Dortmund.

Nicol said: "If somebody says to Haaland, at Man United, 'by the way, you could be the next greatest superstar at Old Trafford to take us to a Premier League title and back into Europe', that could be the thing that sways it.

"To become the man, instead of going and joining Man City or Liverpool or wherever.

"To go and be the kingpin at Old Trafford and take United back to the very top.

"That's the kind of thing that would sway a young man's head, if you ask me."