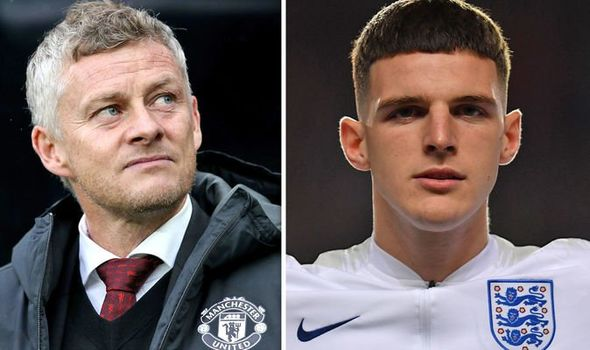 Manchester United boss Ole Gunnar Solskjaer has agreed with John Murtough and Darren Fletcher that Declan Rice would be a good signing for the club. The Red Devils are bracing themselves to lose Nemanja Matic in this summer’s transfer window. And the West Ham midfielder would be the perfect replacement.

United have warned fans against a busy summer transfer window.

But that hasn’t stopped them from being linked with several players as they plot a way to overhaul Manchester City next time out.

At the back, United have been tipped to go after the likes of Jules Kounde, Raphael Varane and Ben White.

And, up top, links to Borussia Dortmund pair Jadon Sancho and Erling Haaland - as well as Tottenham’s Harry Kane - are refusing to go away.

The Sun claim that United may go after Rice, despite the club deeming Scott McTominay as an integral asset for the future.

And it’s said that Solskjaer, Murtough and Fletcher are all in agreement when it comes to the West Ham star, who has enjoyed a fine campaign at the London Stadium this term.

However, any deal for the England international won’t come cheap.

West Ham would like a fee in the region of £80million to part ways with the midfielder, who has helped the Hammers up to fifth in the Premier League.

That would make him the club’s joint second most-expensive signing of all time, the same amount as Harry Maguire and slightly less than the £89m they spent on Paul Pogba.

And previous reports have suggested United could offer up to three players as bait in order to convince David Moyes into letting the 22-year-old make the move.

Jesse Lingard is one of them.

The England international has flourished in the capital ever since moving from United in January, scoring four goals and registering one assist from six appearances so far.

Despite his impressive performances, there doesn’t seem a way back for him at his parent club given Bruno Fernandes, Paul Pogba and Donny van de Beek were all ahead of him in the pecking order.

And other players United could use are Matic and Phil Jones, who are primed to be shown the door anyway.

Meanwhile, speaking earlier in the month, Moyes expressed a belief that Rice is worth more than £100m at the current moment in time.

"I look at the players who have joined some clubs from overseas and come in and nowhere near had the impact Declan Rice would have.

"I certainly wouldn't put a price on it. You can decide which figure you want to put on it but I wouldn't be sanctioning anything like that, that's for sure."

Moyes also played down talk that West Ham would need Champions League football to keep Rice at the London Stadium.

He added: "Do we need the Champions League to keep Declan? No, because Declan is under contract first and foremost, so he can't go anywhere no matter what, and I keep saying it and I hope people know that when I say something, I mean it.

"We've not had an offer for Declan Rice and I hope we don't get one.

“And you've got an idea now of where we'd need to be if it was even going to be considered, certainly be me.

"If we could finish in Europe, in some sort of European position, I think it would be progress.

“And that would be progress for Declan Rice as well because he's been at West Ham while they've been bobbing around the bottom, so this is new for Declan as well.

"Declan seems very settled and in fact he is captaining West Ham, he plays for England, and I want to keep Declan thinking that his a

"For me, I have watched the prices of some players who have gone to clubs recently and they could not lace Declan Rice's boots."