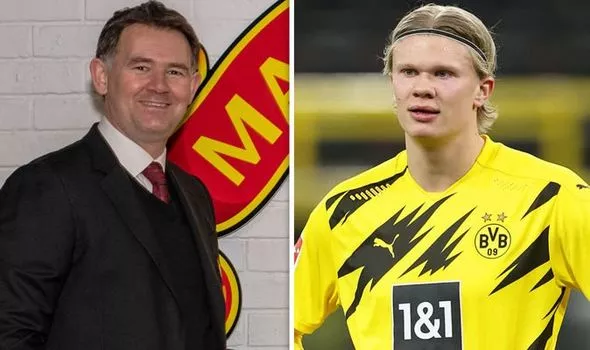 Manchester United have been backed to sign Erling Haaland this summer.
Manchester United can convince Erling Haaland to join the club by selling him the dream of taking the Old Trafford club back to the top of European football, according to Liverpool legend Steve Nicol. Haaland is heavily linked with a move away from Borussia Dortmund ahead of this summer's transfer window.
Haaland has a release clause of around £68million in his contract which doesn't become active until the summer of 2022.

But Dortmund could choose to cash in on the Norway sensation a year before in order to get as much money as they can for the 20-year-old.

Manchester City, Chelsea, Real Madrid and Barcelona are just four of the clubs other than United who are linked with Haaland.

But Nicol believes United could be able to persuade the striker that they are the right club for him, with the lure of becoming the club's next superstar player.

United have recently appointed their first ever football director in John Murtough, who would play a big part in attempting to get Haaland through the door.

Nicol told ESPN FC: "If somebody says to Haaland, at Man United, 'by the way, you could be the next greatest superstar at Old Trafford to take us to a Premier League title and back into Europe', that could be the thing that sways it.

"To become the man, instead of going and joining Man City or Liverpool or wherever.

"To go and be the kingpin at Old Trafford and take United back to the very top.

"That's the kind of thing that would sway a young man's head, if you ask me.

"Well, the problem right now is we don't actually know whether [Real or Barcelona] have the money to do that.

"Manchester United I think right now  in my limited knowledge have money.

"If Dortmund don't get into Europe and Haaland decides 'do you know what? I need to get away', then yes every club might want him, but the ones that could afford him could be pretty slim."

United were interested in signing Haaland before he joined Dortmund in January 2020.

Manager Ole Gunnar Solskjaer recently spoke of his admiration of the forward.

"It is clear that Erling is going to have a fantastic career," Solskjaer said.

“I follow Erling. I have always said that. Was it 18 months we had together or something like that?

“Almost two years, perhaps. A fantastic time. He will surely have a super career both for Norway and his club. He is doing incredibly well for Dortmund.

“We will see where he ends up. As a Norwegian and someone who has worked with him, it is of course great that he is doing so well.”