Manchester United's pursuit of Erling Haaland has received an unexpected boost, while the club have reportedly identified an alternati... 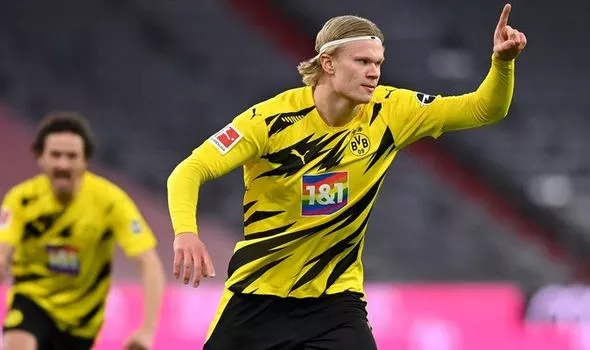 Manchester United's pursuit of Erling Haaland has received an unexpected boost, while the club have reportedly identified an alternative to Jadon Sancho

Manchester United have received an unexpected boost from rivals Manchester City in their pursuit of Borussia Dortmund striker Erling Haaland, while Ole Gunnar Solskjaer's side are making plans for Donny van de Beek and have also identified a potential alternative to Jadon Sancho. Express Sport brings you the latest transfer news on the Premier League giants.

Man Utd could sign Haaland thanks to Man City

United and rivals City are both eager to sign Erling Haaland in the summer transfer window, but it seems the Premier League leaders have started to look elsewhere.

Ings has been in fine form this season, having scored nine goals in 25 appearances across all competitions.

He is under contract until 2022, and therefore it seems likely he could be sold in the upcoming window.

The 28-year-old would be a much cheaper option than Haaland, which makes the deal attractive to City's decision-makers.

If Ings is signed by City, the door would likely be open for United to move for Haaland.

Donny van de Beek has made just two Premier League starts so far this season, and according to 90min.com, United are willing to let him leave at the end of the season.

The report claims that United are open to using Van de Beek as a makeweight in a bid to sign one of their top targets.

The Red Devils are interested not only in Haaland, but also his Borussia Dortmund team-mates Jadon Sancho and Manuel Akanji.

And the inclusion of Van de Beek in any potential deal could persuade the Bundesliga side to sell.

United are said to have broached the idea to Dortmund, who are interested.

United are reportedly looking at alternatives to Jadon Sancho, and have identified Wolves winger Pedro Neto as a target.

The 21-year-old has been impressive this season and has five goals and four assists from 29 Premier League appearances.

The Sun claimed over the weekend that Neto is valued at £50m by Wolves.

However, the CIES Football Observatory values him at between £60m and £77m, so it seems United might have to pay  significantly more to land him.