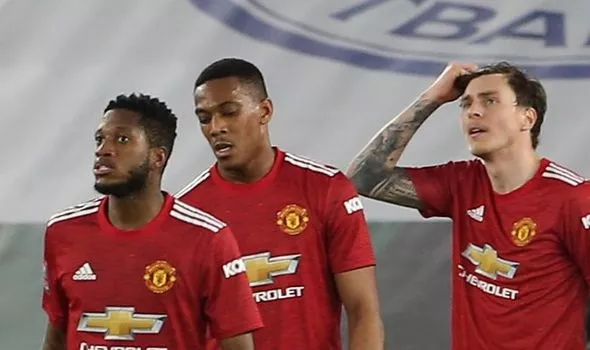 Manchester United were dumped out of the FA Cup by Leicester City on Sunday.

Alan Shearer has slammed Manchester United forward for Anthony Martial and has claimed ‘he doesn’t look as if he has the hunger to score goals’. Martial cut a frustrated figure as the Red Devils were dumped out of the FA Cup by Leicester City.

Goals from Kelechi Iheanacho (x2) and Youri Tielemans helped the Foxes to a 3-1 win, as they booked their place in a Wembley semi-final.

But it was more cup misery for United, as Ole Gunnar Solskjaer’s side stumbled in the latter stages once again.

Solskjaer opted to start Martial as a lone striker against the Foxes and failed to have any impact on proceedings.

And Shearer believes, his frustrating display shows that he is not a true No.9 that can lead the Manchester United line.

“He was very isolated but then sometimes you need help off your team-mates but you can also help yourself by putting yourself in better positions,” Shearer told BBC Sport.

“It was a really frustrating performance for him because when his team-mates are looking for options from him, for him to either come short to be the link-up play, a lot of the time I’m thinking, ‘Come on, help’

“Paul Pogba is looking for some help, he needs a run off the forward, there’s no one there.

He added: “In his defence, he never really had any midfielder who was prepared to run past him or prepared to give him that little bit of support he so badly needed.

“He kept on pulling onto the full back for the long diagonal, which is fine that can be good but not every time.

“It didn’t really work for him tonight and I was really frustrated for him on the sidelines.

“I don’t think he’s a nine. He doesn’t look comfortable in the nine position. He doesn’t look as if he’s got that hunger to score as many goals as he could and should. It was a frustrating performance.”

“In my opinion Man United don’t have a No. 9. Edinson Cavani, thats it. ‘The rest are very good coming in from the left, off the right but Martial is not a centre-forward. Absolutely not. 100%.”

Solskjaer refused to pin the blame on any single player and instead pointed to fatigue after a hectic fixture schedule.

“This team have been fantastic in the last three or four months,” Solskjaer explained. “We played every three days and been on a great run. It just caught up with us - all the games and travels.

“Thursday night in Milan was a big night and took a lot of out of us physically. We didn't have the extra zip, authority and confidence.”