Marcus Rashford could miss both of Man United's games this week with an ankle injury and a number of players are absent for the visit ... 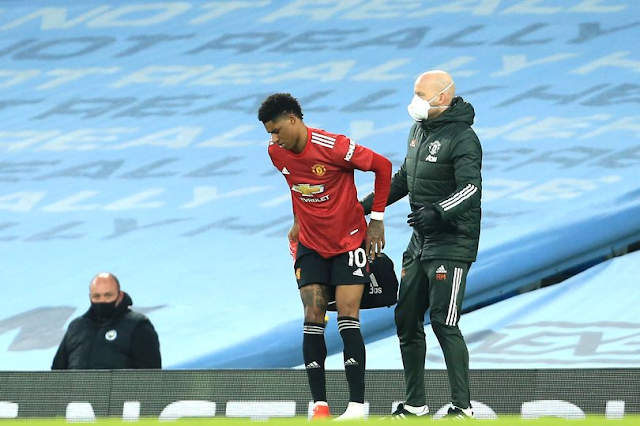 Marcus Rashford could miss both of Man United's games this week with an ankle injury and a number of players are absent for the visit of AC Milan.

Manchester United are expected to be without Marcus Rashford and Edinson Cavani for their Europa League round-of-16 first leg with AC Milan at Old Trafford.

Rashford sustained an ankle injury in the win at City on Sunday and was forced off in the second-half while Cavani has missed five of United's last six games.

Paul Pogba is still sidelined with a thigh injury, Donny van de Beek is unavailable because of a muscular injury and Juan Mata is also still absent. David de Gea is not expected to play before the March internationals.

Rashford, 23, could also miss the Premier League visit of West Ham on Sunday and Anthony Martial is set to continue up front. Phil Jones is still injured.

"I don't think he'll be available for tomorrow," Solskjaer said of Rashford. "He's still getting treatment but he didn't join in during training today. Even though I'm normally a very optimistic guy, I think he's out for tomorrow night and probably a doubt for the weekend.

"But that 60 or 70-yard sprint recovery run just showed the hunger, appetite and spirit we've got and the humility in our work. It was probably worth it there and then but you're never happy when you lose players for games."

Dean Henderson will start his third successive United game for the first time while Eric Bailly and Alex Telles could be recalled in defence. Nemanja Matic could come into the midfield and Mason Greenwood is set to start.