Man United have tied down Shola Shoretire, Hannibal Mejbri and Anthony Elanga on new contracts in a short space of time years after the Pa... 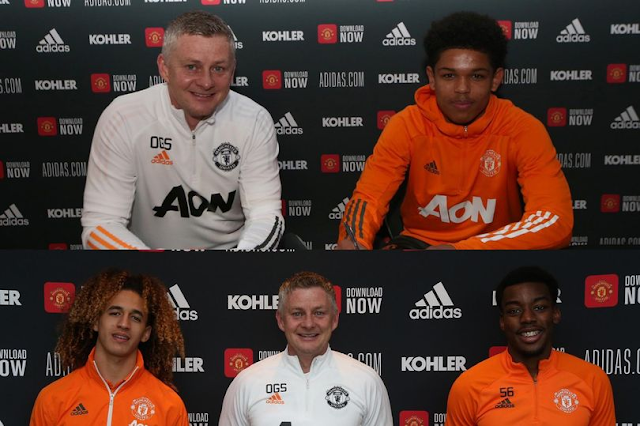 Man United have tied down Shola Shoretire, Hannibal Mejbri and Anthony Elanga on new contracts in a short space of time years after the Paul Pogba palaver.

That Solskjaer was present to congratulate them is a reflection of each academy player's standing at United. Shoretire and Mejbri have relocated from the academy building to the first-team hub and Elanga travelled with the first-team squad before the start of the season.

Shoretire broke Norman Whiteside's 38-year record as United's youngest European debutant against Real Sociedad. Mejbri would have likely debuted but for an untimely injury but did some fitness work with the Under-23s last week.

Such investments are common at United and pre-agreed. The club offers a scholarship with a professional deal on an academy player's 17th birthday and then a second professional contract between the player's 18th and 19th birthdays.

What industry observers find so striking is the publicity United are giving their youngsters, particularly as some have never played for the first-team. It did not used to be this way.

The raft of renewals suggests United have learnt from the Paul Pogba palaver in 2012. Pogba joined the club in 2009 and, despite his talent, reputation, success in the Youth Cup and the first-team's midfield malaise, discussions over an improved contract did not start until it was too late. Sir Alex Ferguson has always sought to blame the influence of Mino Raiola but he mismanaged Pogba when he was 18 going on 19.

United also cut it fine with Dean Henderson, who committed 16 days before his contract was due to expire in 2018. The club has since been ahead of the curve: Henderson, Scott McTominay, Brandon Williams and Mason Greenwood each agreed three contracts in as many years and one of the first things in Jose Mourinho's in-tray was to sign off on a more appropriate contract for Marcus Rashford. A condition of certain academy loans has been their deals with United are extended.

Elanga, unfortunately, could miss the remainder of the season through injury but is highly thought of. Back when crowds were allowed inside Old Trafford for first-team and academy matches, Deji Sotona - United's matchwinner in their Youth Cup quarter-final against Wigan - was confident of overcoming Chelsea on account of Elanga's likely return.

By the time United met Chelsea eight months later at St George's Park, Sotona had left for Nice but Elanga was their standout performer and almost went viral with an improvised overhead kick that cannoned off the crossbar.

The Swede enjoyed first-team exposure before Shoretire, enjoying a bright cameo in United's only pre-season friendly at Aston Villa in September. Elanga's father, Joseph, was a member of Cameroon's World Cup squad in 1998. Elanga and the family moved to Manchester when Elanga was 11. He already has a Manchester twang to his accent.

"You look at the likes of Mason and Rashy, there is a pathway there," Elanga said back in October. "Obviously we've got a manager in Ole trusting the youngsters, so there's a pathway there and I've just got to keep working hard.

"I always grew up watching United and when I’d seen that I got scouted I was like, ‘Woah, it’s an opportunity I can’t say no to’.

“My mum and dad always said just stay focused and don’t let success get to your head, if that makes sense. Don’t get complacent.

Joseph Elanga was a defender. "He was tough - and still is," Elanga stressed. "After games he'll tell me what I've done well and what I can improve on, which is good. You need something like that to keep you going because you can't just relax on one game. You can always get better and better. It is an inspiration to have him around."

Shoretire is the only one of the new deal trio with first-team minutes to his name and he dropped back down to the Under-23s for their goalless draw with Brighton last Friday for some overdue playing time. Neil Wood, the U23 coach, remarked days before United announced Shoretire's professional terms the forward was still not ready for a loan in the Football League, never mind first-team minutes with United.

"If you’d asked Joe [Hugill] to go on loan this year or Hannibal or Shola, it’s too soon," Wood stressed. "They just wouldn’t cope in a league."

Mejbri was chaperoned by the United football director John Murtough for the first-team's friendly with Kristiansund in Oslo in 2019, before the club confirmed his €10million move from Monaco. In the enthralling 6-4 victory over Blackburn U23s last month, he was fouled nine times and, according to data on WyScout, has been on the receiving end of 90 fouls in 29 appearances for the United junior teams.

With his bushy Sideshow Bob hair, the Frenchman is an inevitable target for budding hatchet men and Mejbri has already chided Leeds fans in person and on social media. In response to chants of 'you're just a s--t Sideshow Bob', during last year's Youth Cup win, Mejbri uploaded a picture of the cult antagonist in The Simpsons and wrote: "I admit there is a little resemblance."

Depending on how United fare in the run-in and their summer activity, loans next season are possible for Shoretire, Elanga and Mejbri. Elanga is 19 next month and was sidelined for three months last season. This week's renewal is a mental boost after a stop-start 18 months.

Should United insist he stay within the English football pyramid, Elanga will have caught the eye of Football League clubs with his stunning solo goal at Accrington in the EFL Trophy.

It was a goal that merited more than bumping elbows.