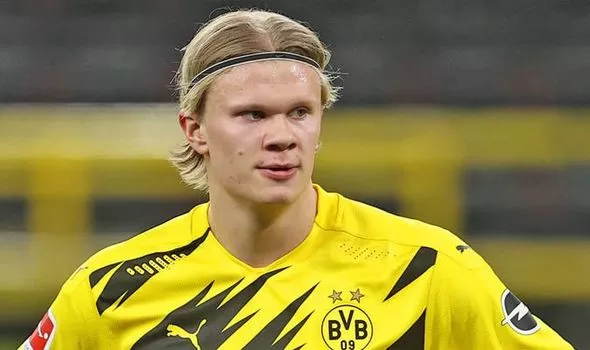 Manchester United want Erling Haaland. Unless you’ve relocated to outer space - and we’d be envious if you had given everything that’s happened over the past year - it’s an open secret everybody knows about. And, in Anthony Martial, the Red Devils may have the perfect player to include in a swap deal.

Both Ole Gunnar Solskjaer and Ed Woodward jetted out to Austria when the striker was strutting his stuff for Red Bull Salzburg - and left convinced they’d come to an agreement.

In the end, however, that didn’t happen.

United missed out on Haaland, putting the blame firmly at the door of Mino Raiola - who they suspected had interfered in negotiations.

So in the end, the Norway international joined Borussia Dortmund.

And he’s been in sensational form in the time since, scoring 48 goals and taking the Bundesliga by storm in the process.

As a result, United have now changed their mind. Having initially targeted a new centre-back, and Jadon Sancho before that, Haaland is now their No 1 transfer target.

The problem is, however, that Solskjaer’s side aren’t the only player in the mix when it comes to snapping up the 20-year-old.

Manchester City are keen as well, with the club willing to do business with Raiola - despite the super-agent once branding Pep Guardiola ‘a dog’.

Real Madrid are keeping an eye on things as well, though their preference at the current moment in time appears to be Paris Saint-Germain striker Kylian Mbappe.

PSG themselves could enter the race if Mbappe departs.

And Barcelona would love to sign Haaland should Messi quit the Nou Camp, something that’s definitely possible with his contract expiring at the end of the campaign.

But, in Martial, United could have the perfect bait.

The France international may be shown the door this summer, with Solskjaer unhappy with his lacklustre performances in front of goal.

And Dortmund have been interested in the forward in the past.

Sky Sports claimed three years ago that Martial was being tracked by the Bundesliga giants at a time where he looked destined to be sold by Jose Mourinho, who he’d fallen out of favour under.

Chelsea were also in the mix for the France international but a move to Germany would likely have appealed far more to the club’s hierarchy.

In the end, however, Martial stayed.

Joel Glazer personally intervened to stop the forward from leaving Old Trafford - much to Mourinho’s dismay, who wanted Ivan Perisic.

So if United want to sign Haaland, Martial may just be the ticket.

A move to the Westfalenstadion, where he’d play alongside the likes of Sancho and Marco Reus in attack, could be just what he needs.

United have given Martial plenty of opportunities to prove himself over the years.

But a parting of the ways would suit both parties - and Dortmund may find the United star a difficult player to say no to.

Meanwhile, Martial was slammed by ESPN pundit Shaka Hislop after struggling in the club’s recent 1-1 draw with AC Milan.

"This is the big criticism around Anthony Martial. Incredible talent but sometimes when he doesn't do what's asked of him, it weighs heavily on United.

"United wanted their front three to be pressing Milan at the back and preventing those easy balls from defence into midfield and whoever's up front. Martial wasn't keeping up his end of the bargain.

"Amad comes on and you see an energy around that front three, how they're pressing, and that changes everything about the game.

"It changes everything about how Milan move the ball from back to front, how they receive the ball in midfield and are allowed to turn and go at United.

"More to the point it changes everything about United and how they go forward. Then the run from Amad and the little ball from Bruno Fernandes, who you saw nothing of in the first half, even he rises to the ask of him with a more energetic front three.

"Credit to the young man for coming on and taking the goal as well as he did. You have to appreciate his awareness around that situation.

"Even more than just scoring the goal, he changed everything about United's performance in the second half and that for me was deserving of all the plaudits."