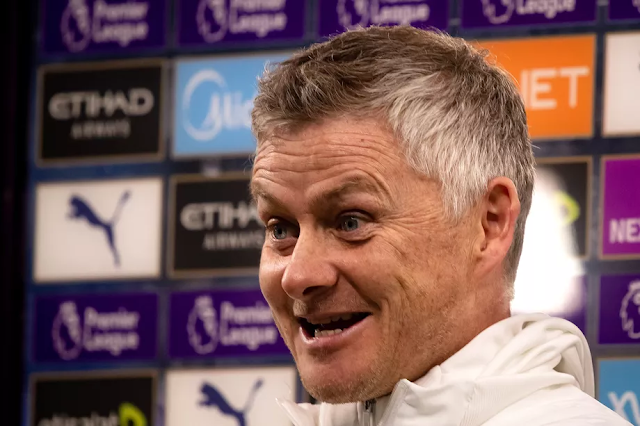 For the third time in two seasons, Solskjaer had Guardiola’s number tactically

For the third time in two seasons Ole Gunnar Solskjaer went to the Etihad and came out with a win that no one really thought he had a chance at getting. Once again the Norwegian went toe to toe with Pep Guardiola in a tactical chess match and came out on top. This was a match of moves and counter moves. Adjustments had to be made at the right times and when all was said and done it was Solskjaer who had more ideas than the Catalan.

Most of Manchester United’s previous matches against the ‘Big Six’ this season have ended in 0-0 draws. The overall theme of those matches was that United set out to deny what their opponents did really well, even if it meant taking away what United did well in the process. The plans in each match were similar, but each was uniquely tailored to their opponent and had a unique twist that one might not have seen coming.

Last week against Chelsea, that twist was a high press. On Sunday against Manchester City, it looked like that high press was going to make a return. Less than a minute into the match Harry Maguire pushed up ahead of Scott McTominay to follow the run of Gabriel Jesus. By staying on him, Jesus couldn’t turn around, allowing Fred to close him down, steal the ball, and push it forward. United’s forwards then did what they do best. 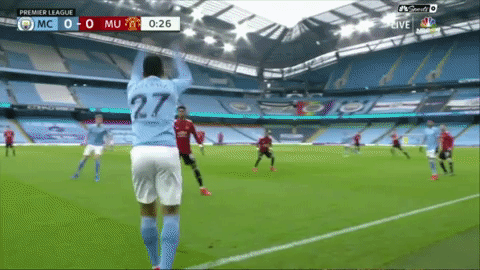 Less than a minute in there was no more chance of a 0-0 draw. After the goal United kept that high line, shocking City a bit and leading to some chances.

And when they lost the ball, they were relentless in winning it back.

It was a bright opening five minutes for United, but probably not something you could do all game. Last week against Chelsea United didn’t turn their effective high press into very good scoring chances, and they were pretty wasteful again on Sunday.

City are a team that want to be pressed. They can all play with the ball at their feet. They’re all very press resistant. As such, after giving City something to think about for the first few minutes, United settled down into what would be their actual defensive game plan. They were going to ‘press’ high up the pitch, but it wasn’t an aggressive press. It wasn’t designed to win the ball back.

They wanted to let City’s defenders know they weren’t going to have much time on the ball, but the main focus was to cut off all the passing angles to City’s primary midfield playmakers — Ilkay Gundogan and Kevin de Bruyne. If City were just going to pass it around the back all day, so be it.

As United weren’t trying to win the ball back up high, they didn’t care too much about letting City slowly come up the field. At the midfield line they kept their lines just the same.

Instead of pressuring the ball, United’s emphasis was the on the players that didn’t have the ball. If you have no one to pass to, you can’t be dangerous. They maintained their 4-2-3-1 shape with McTominay and Fred often playing very wide as they followed De Bruyne and Gundogan wherever they went. Meanwhile the front three stayed narrow to cut off those passing angles through the middle. 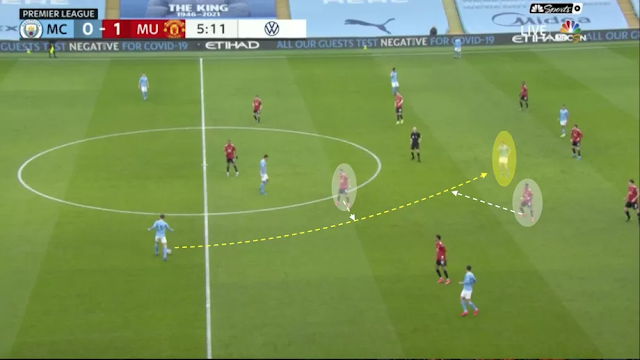 Here, watch how McTominay reacts when the ball comes out wide. His natural instinct is to mark that space so Rodri doesn’t run forward, but at the last second he remembers his job to cut off angles to Gundogan.

United were happy for Rodri or the defenders to have the ball. They were content to let City pass around the back and out wide as much as they wanted. When De Bruyne was finally able to get free to receive the ball he was near the touchline. His mistouch gives possession back to United but even if that doesn’t happen they’re okay with this situation. This position isn’t where De Bruyne is going to hurt you.

In the 21st minute one sequence would tell City everything they needed to know about what United’s priorities were and how they could beat this.

John Stones gets the ball near the halfway line, but instead of looking to pass forward he just runs with it himself. United’s players don’t want to commit and open up passing lanes, so no one is in position to stop him. The most telling aspect here is Fred, who essentially jumps out of Stones’ way to make sure he can’t pass the ball to De Bruyne.

Now it’s clear. De Bruyne is the mark. United are under clear instructions to make sure they know where he is at all times and to never leave him open.

Here you would think Anthony Martial would close down Rodri who’s in a dangerous position at the top of the box, but that would leave De Bruyne open, so he doesn’t commit.

Later when De Bruyne slips free in a dangerous position, Martial flies back to put him under pressure.

When he’s left open at the top of box, look at how many United players drop everything and rush to trap him. 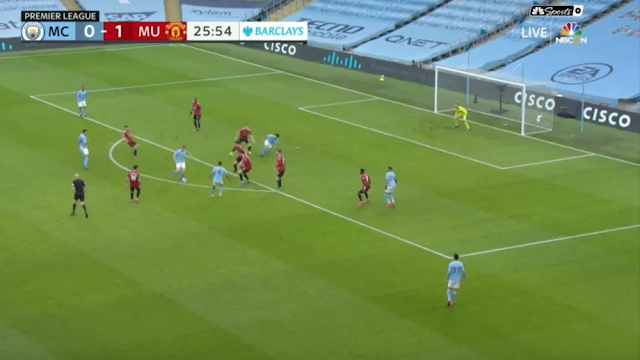 This isn’t the first time we’ve seen this tactic from United, though it’s much more noticeable when something goes wrong rather than when it’s done correctly. In the 6-1 loss to Tottenham we can see Harry Maguire looking around for Harry Kane when chasing down a ball. When he realizes he needs to commit wide, he points at Kane and shouts for someone to pick him up, even though he’s not in a dangerous place. He’s the mark.

Luke Shaw reacts and runs to Kane. Heung Min Son attacks the space left by Shaw, and we know how this plays out.

City are 11 points clear at the top of the league for one simple reason. They are the only consistent team in the league. In a pandemic-shortened season where everyone is exhausted, City aren’t. That’s thanks to loads of squad depth and simply because their playing style doesn’t tire them out.

This City team is unlike any of Pep Guardiola’s previous iterations. They’re a much slower side. They’re far more patient and far more boring. Pep has spoken about finding times in the games where his players can walk. If you have the ball you can walk more, and if you walk more you don’t get as tired.

That Stones carry changed the match. It told City exactly what United’s plan was. The players without the ball are more important than the ones with it. City were now able to calm down and play patiently. They could walk more.

Even though City are walking more, United still have to defend. That constant defending, constantly moving from side to side to cut down angles, wears you down. By about the 25th minute United were exhausted. Their legs were heavy.

That exhaustion brings about mistakes. You under hit a pass, your touch is a little heavy and you give the ball away.

You aren’t fast enough to run away from trouble. You let a pass go right through your legs.

You choose the wrong pass when you know better.

This is all just mental exhaustion.

United escaped with a halftime lead. Both coaches had made their openers, now it was time to adjust. Solskjaer did.

One of the issues plaguing United in their ‘Big Six’ matches has been their conservative use of their fullbacks. You know Bruno Fernandes is going to be tightly man marked in these matches, making it difficult for him to have an impact. To make up for that, you need your second best creator to do his part. This season that’s been Luke Shaw, but against the top sides United have been holding him back, using their fullbacks more to support the attack rather than having them drive forward to build them.

Eventually something would have to give and on Sunday, Solskjaer found a middle ground. Looking at United’s average positions we can see what Solskjaer did.

With Fred and McTominay man marking De Bruyne and Gundogan, the midfielders couldn’t cover those forward runs, so Wan-Bissaka was more reserved than usual, staying back to ensure Untied always had three men back. The right-back didn’t make a single progressive pass, he never passed into the final third, and he took a grand total of two touches in the attacking third of the pitch.

This allowed Solskjaer to take the shackles off of Shaw. He’d have the freedom to go and drive forward. It didn’t take him long in the second half to do what he’s been so good at this season. Get on the ball, drive forward, and create a chance.

This time, the chance that Shaw created happened to fall to Shaw himself. He took it.

And that was game over. It didn’t matter that there were 40 minutes left, the match was over.

There’s a scene in the movie Miracle towards the end of the United States’ semifinal match against the Soviet Union. With the USA holding a one goal lead, head coach Herb Brooks is trying to get his lines right for the end of the game. He turns to his assistant coach Craig Patrick and says, “when they pull [goaltender] Myshkin I want fresh legs.”

The Soviets keep applying pressure but with a minute left Patrick turns to Brooks and says, “they’re not pulling Myshkin.”

Brooks looked over towards Soviet coach Viktor Tikhonov before turning back to Patrick and exclaiming, “he doesn’t know what to do!”

This was the Soviet Union. They had won the last four Olympic Gold Medals. In the last two years under Tikhonov they played 16 games in the World Championships and won 15 of them. They had won all five of their prior games in the Olympics that year. They were undoubtedly the best team in the world, but trailing late in a game wasn’t something that they ever had to deal with. When they found themselves in that scenario, they froze up. They didn’t know what to do.

That was Pep Guardiola on Sunday.

City hadn’t trailed in 19 straight Premier League matches. That’s half a season. Going 1-0 down wasn’t a big deal. They’d stay patient, they’d eventually wear United down, they’d create enough chances to score a goal, probably two. They were creating those fancy back post chances that they do so often. The ones that are very difficult to pull off but if you just get on the end of the run it’s an easy tap in.

But when they went 2-0 down they panicked. They needed to be more direct but they couldn’t. They’re not built to play that way. The game opened up. United were able to start getting more breaks.

Which they were incredibly wasteful with.

And on the other side City themselves got some breaks.