Rio Ferdinand believes Harry Maguire was largely to blame for Kelechi Iheanacho’s opener in Manchester United’s 3-1 defeat to Leicester and says the defender should have known not to play such a high-risk pass to Fred in the build-up to the goal. The Foxes booked themselves an FA Cup semi-final spot for the first time in 39 years and were deserved winners, with Ole Gunnar Solskjaer’s side flat from minute one at the King Power Stadium on Sunday.

Mason Greenwood cancelled out Leicester’s earlier strike with a smart finish of his own in the 38th minute but the hosts put the tie to bed in the second half thanks to Youri Tielemans’ driven effort and Iheanacho’s headed second goal.

It was a tough return to Leicester for Maguire – who spent two years with the club before his world-record £80million move to Old Trafford – and Ferdinand was less than impressed with the role United’s captain played in the visitors going behind.

Looking back on Iheanacho’s opening goal, ex-United centre-back Ferdinand told Rio Ferdinand Presents FIVE: ‘Fred should be doing better than that and he’s been caught a couple of times before in that type of situation. ‘As for Maguire, one criticism I would have, is I would say: “Know your players.” ‘If that’s [Donny] van de Beek, if that’s [Paul] Pogba, if that’s Bruno Fernandes, you play them the ball like that and it’s not a problem. ‘But if it’s someone where you feel that’s not a strongpoint, then maybe you shy away and play past that.’

Iheanacho scored in both halves to steer Leicester into the semi-finals (Picture: Getty)

Ferdinand feels Leicester’s players had a ‘fire in their belly’ and looked far hungrier than United throughout the quarter-final clash. ‘I don’t think they were at the races at all,’ he added. ‘Mistake from an individual or not, Leicester rightfully got the result because they were there better team. ‘They had that fire in their belly, you could see that they had that spark about them that Manchester United were lacking.’

Solskjaer refused to play the blame game after United’s defeat and defended Maguire and Fred for wanting to pass the ball out from the back. ‘We want to build from the back and want the players to be confident – sometimes it doesn’t work and that’s one time it didn’t,’ the Norwegian told BBC Sport. ‘When we win, we win together and when we lose, we lose together. ‘We’re not pointing fingers and blaming – the second one is a good goal by the boy but maybe with a zip of energy we could’ve got to him and wouldn’t have been done as easily in the middle. ‘That’s been one of our strengths, keeping clean sheets and been dogged but we didn’t have the opportunity.’ 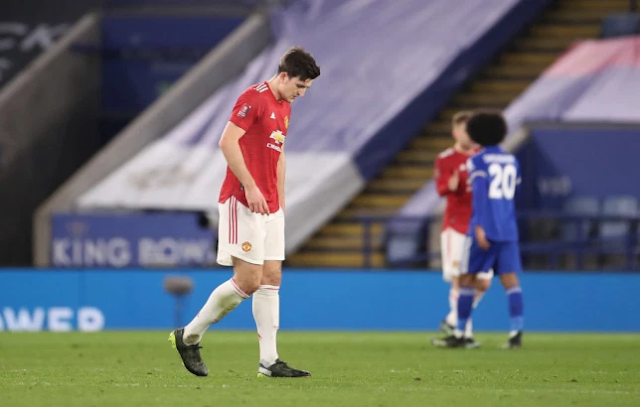