Roy Keane is being touted to become the new Celtic manager as the permanent replacement for Neil Lennon. Roy Keane's former Republic o... 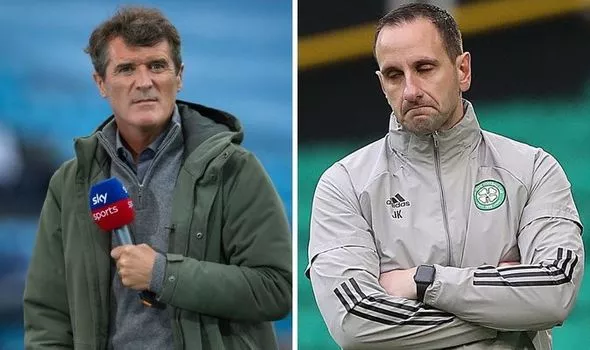 Roy Keane is being touted to become the new Celtic manager as the permanent replacement for Neil Lennon.

Roy Keane's former Republic of Ireland team-mate Ray Houghton has come to the defence of the Manchester United legend amid speculation he's being lined up for the Celtic job. Keane has not held a full-time managerial position since leaving Ipswich in January 2011. He would go on to hold assistant manager roles with Ireland, Aston Villa and Nottingham Forest.

But Keane has since been a regular member of Sky Sports' coverage of the Premier League, proving a popular figure among viewers alongside Micah Richards.

Reports have suggested that Keane is interested in a return to management though with the Celtic post said to be a top option.

John Kennedy has been in interim charge since Lennon left his post as Celtic boss last month.

Former Crystal Palace owner Simon Jordan though doesn't think Keane should be the man to take the post on a permanent basis.

“I think it’s a huge risk [to appoint] the Roy Keane we have now,” he said on talkSPORT .

“Roy Keane going into management the first time around, possibly, but the Roy Keane we’ve got now? I think as a football manager he’s done."

But Houghton has backed Keane to prove Jordan wrong should he decide to return to management.

“This nonsense of ‘he’s done as a manager now’… this is what we do in football," he told talkSPORT.

“We give people a go at being a manager, you’re not a success and that’s him gone, he’s no good.

“That doesn’t make them bad players, it just means it isn’t the right league for them. With management, that could be the case as well.

“I don’t know what’s going to happen with Roy in the future as far as management is concerned.

“He might want to go back into it, the rumours might be true. He certainly would have learned a lot in his time with Martin O'Neill.

“Dermot Desmond, who is still the majority shareholder of Celtic, he might feel that’s the next step for Celtic with Steven Gerrard doing the job he’s doing at Rangers.