JAMIE Carragher is urging defenders to not make tackles in the box on the back of Luke Ayling's foul on Jesse Lingard for West Ham'... 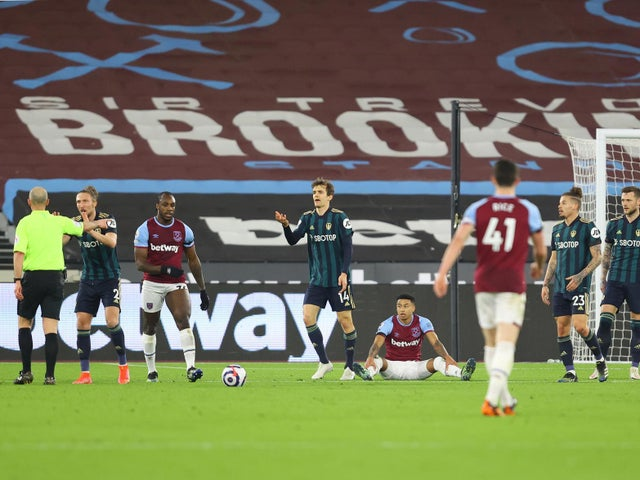 JAMIE Carragher is urging defenders to not make tackles in the box on the back of Luke Ayling's foul on Jesse Lingard for West Ham's penalty against Leeds United.

Marcelo Bielsa's Whites began brightly in Monday night's Premier League clash at the London Stadium but the Hammers were awarded a 19th-minute penalty when Ayling clipped Lingard in the box.

The Leeds defender attempted to intercept the Manchester United loanee as he darted along the edge of the area but Ayling caught Lingard's foot leaving referee Mike Dean to point to the spot.

Lingard then saw his spot kick saved by Illan Meslier but the England international converted the rebound and the strike laid the foundations for a 2-0 Hammers victory.

"I just think defenders now, just don't tackle in the box," said Carragher on Sky Sports as he analysed the incident.

"Jockey, stay on your feet and either try and block a shot or block a cross, whatever it may be.

"I just certainly think with VAR you are not going to get away with things now even if a referee is blocked.

"Maybe he can't see it and we have all made that challenge as a defender where you make the challenge and you are waiting for a few seconds for the referee's whistle and you know you have got away with it.

"Them days are gone with VAR so if you make a poor challenge you are going to get done so my advice for defenders playing in the Premier League now but also any other young defender, don't make tackles in the box."

Carragher highlighted Diego Llorente's attempts to mark Dawson and said the Spanish international defender needed to be tighter to his man in his starting position.

Carragher reasoned: "You have got to be touch tight or sometimes when you are maybe in a zonal situation and you are not sure where people are going to run, sometimes you maybe stand off them.

"Sometimes what can happen is you have three or four bodies and you say 'I am with that one' and you have all got your markers.

"You are almost waiting for players even though you are man marking.

"It's almost like semi zonal, semi marking but he (Llorente) is just nowhere near him (Dawson).

"He's not tight enough and it allows him to have a run.

"Maybe he sees the two West Ham players together and he thinks how can I mark him so I can understand that a little but but he's still got to be a bit closer.

"It's something they think they can exploit against Leeds, they've done it twice in two games as well so it's obviously a huge area and probably not just for West Ham but maybe other people watching - Leeds at the back post, maybe pinning the goalkeeper and making it tough for them."