Joan Laporta is favourite to win the Barcelona election and be the face of post-Bartomeu era at the Nou Camp – but is this  really  the man ... 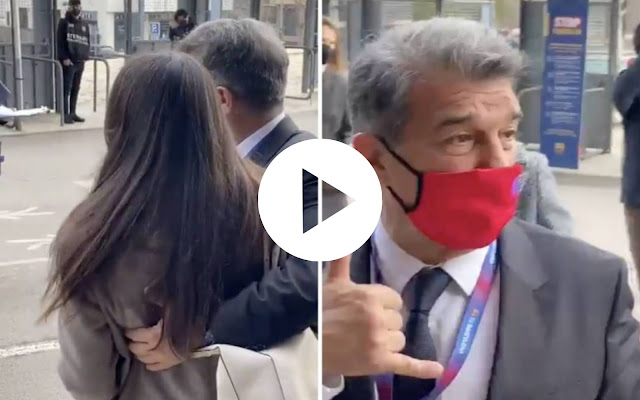 Joan Laporta is favourite to win the Barcelona election and be the face of post-Bartomeu era at the Nou Camp – but is this really the man they want to take them forward?

There’s talk on Twitter that Laporta is set to run away with the postponed Barca presidential election, with the 58-year-old’s second coronation with the Catalan giants now looking like it could be just a matter of time.

On paper, the second coming of Laporta looks like it could be what Barca need to propel themselves into a prosperous future, with the man who served in office at the Nou Camp between 2003 and 2010 a far cry from Josep Maria Bartomeu in terms of both personality and strategy.

Though, Laporta isn’t without his flaws, and flaws are not what Barcelona need considering how much of a hit their reputation has taken in recent times. Said flaws where there for the world to see in a clip which went viral on Sunday.

Laporta, while donning a mask but showing no regard for social distancing, grabbed a female fan by the back while posing for a photo, before saying “when you turn 18, call me” as he walked away.

This is properly grim stuff from Joan Laporta, likely to be elected Barcelona president tonight. Asking an underage girl to call him when she turns 18. There’s no context or environment in which this is not incredibly creepy and totally inappropriate. https://t.co/TnhpHGvvCa

Now, this clip is taken completely out of context, so Laporta may well have been referring to the voting age for the Barcelona election, which is 18, though it’s unclear why he would need this girl to call him at that time.

It’s unwanted and unnecessary negative press for the Barcelona president-elect, and something that he will want to clear up at the earliest possible opportunity, no doubt…