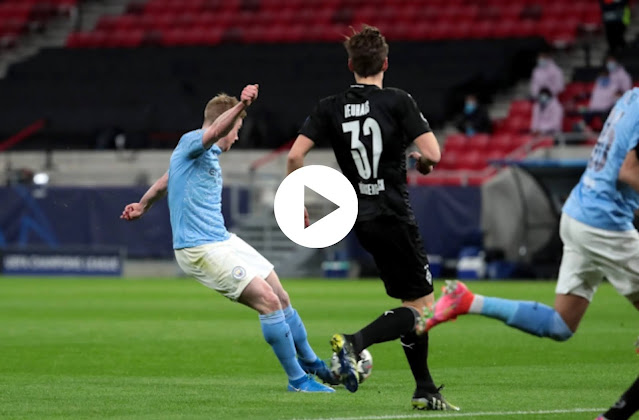 Ilkay Gundogan got the Citizens’ second on the night to put the tie to bed, but in truth everything was settled after the first leg at the Puskas Arena in Hungary.

Goal 💯 for Man City in all competitions this season 🔥

And what a goal it was! pic.twitter.com/PVAWWoulwK

City went into the game with a 2-0 lead over the German side following victory in the ‘away’ first leg at the same neutral venue three weeks ago.

Pep Guardiola’s side started strongly and had an early chance when Joao Cancelo set up Phil Foden, but the England youngster could not make firm contact with his volley.

They did not have long to wait, however, taking the lead in the 12th minute with a stunning strike from De Bruyne.

The Belgian found the net with a powerful effort from outside the box, giving City a 3-0 lead on aggregate.

Gundogan doubled the lead six minutes later after a brilliant turn and run from Foden to break from halfway.

The German made no mistake as he was played in on goal, firing a low shot into the bottom corner.

At half-time, the score was 2-0 and the tie was finished.

The second half was quiet as City simply saw out the victory with no dramas.

They will now claim their place in the quarter-final draw.