Video: Lionel Messi gets in on the act with brilliant finish as Barcelona run rampant against Real Sociedad

Lionel Messi has got in on the act for Barcelona away at Real Sociedad, adding a fourth goal on the night. On the day that Juventus’ title c... 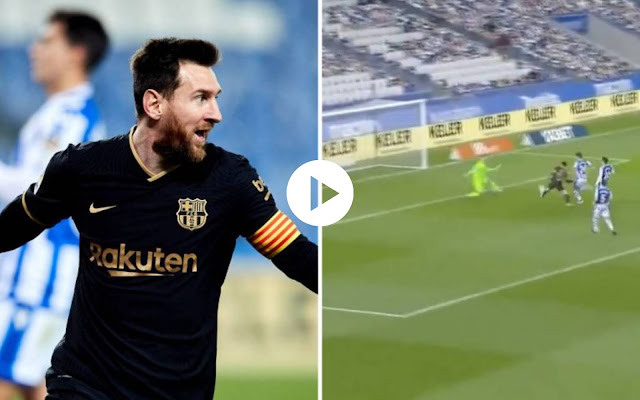 Lionel Messi has got in on the act for Barcelona away at Real Sociedad, adding a fourth goal on the night.

On the day that Juventus’ title challenge effectively ended, with Cristiano Ronaldo unable to have any sort of influence during the 1-0 defeat to Benevento, Lionel Messi has stepped up to the mark with a quite brilliant performance at the Anoeta Stadium, which is not an easy place to go.

Messi has been in inspired form of late, leading Barcelona’s pursuit of Atletico Madrid at the top of La Liga. Tonight’s trip to Real Sociedad threatened to pose a significant threat to the Catalan giants, but they’ve made light work of them, with Messi now getting himself on the scoresheet.

The Argentine beat the offside trap and flicked the ball over the goalkeeper with the outside of his left-boot, crushing any possibility of a Real Sociedad comeback and sending a clear message to the two Madrid giants – Barca, and Messi in particular, are going to fight until the final day for the title.

Lionel Messi gets a goal of his own and Barca are on fire! 🔥

Fantastic pass over the top by Busquets, great run by Messi, and there was never any doubt about the finish 🙌 pic.twitter.com/so9QTM2wTD