Video: Olympiacos star Ba in tears after red card against Arsenal following foul and punching of the ball

In the 81st minute of this evening’s Europa League second-leg tie between Arsenal and Olympiacos, Ousseynou Ba was sent off after receiving ... 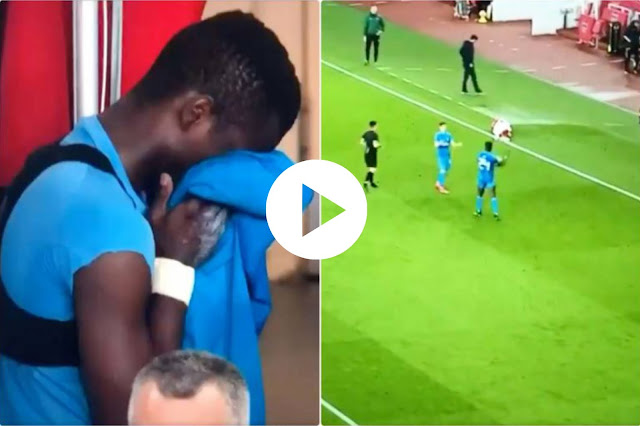 In the 81st minute of this evening’s Europa League second-leg tie between Arsenal and Olympiacos, Ousseynou Ba was sent off after receiving two yellow cards from the referee.

Ba fouled Gabriel Martinelli after the Gunners substitute was close to charging past the Olympiacos centre-back with his lightning-fast past.

The defender was of course frustrated after the moment, picking up the ball and punching it away towards the referee, this earned Ba a second yellow card and sending off.

This decision appears to be pretty harsh, the ball never actually struck anyone after it was hurled away by the Senegal international, but it was something the referee did not want to forgive.

Ba was in tears when the cameras panned to him on the sidelines, the ace was being consoled by Olympiacos staff and was covering his face in a towel.

For those wondering, Ousseynou Ba was given a red card for this. A yellow card for the original challenge on Martinelli, the second yellow for throwing the ball away #ARSOLY pic.twitter.com/rmDKy0zkQm

Do you think that the 25-year-old deserved to be sent off after both of these offences?