Video: VAR controversy as Man City are denied penalty after Phil Foden battles back to feet from tough challenge

In the 30th minute of tonight’s Premier League clash between Manchester City and Southampton, it looked as though Pep Guardiola’s side shoul... 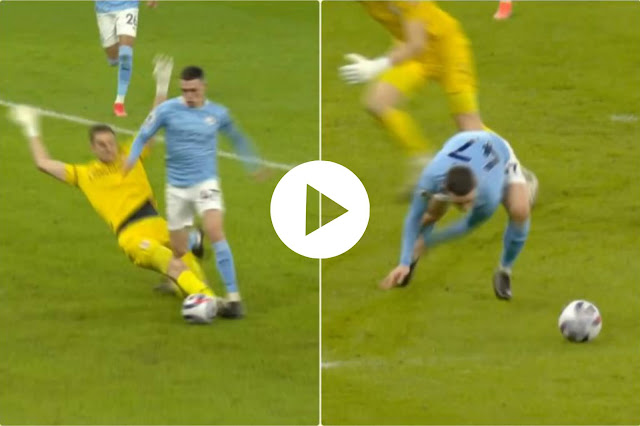 In the 30th minute of tonight’s Premier League clash between Manchester City and Southampton, it looked as though Pep Guardiola’s side should’ve been awarded a penalty.

Phil Foden pounced onto the ball after a woeful error from the usually solid Alex McCarthy, whose heavy touch saw the ball run free, the England international stopper then cut down the starlet with a challenge.

20-year-old Foden somehow managed to stay on his feet despite the tough and seemingly unlawful sliding tackle, battling back up before the move eventually played out.

In a disastrous turn of events, VAR was called in to review this for a possible penalty, but found no wrongdoing, Foden has essentially been punished for doing the honourable thing after being fouled.

Phil Foden stayed on his feet, but should Man City have had a penalty?

Whilst the end of the season is usually a dreary prospect for football fans, at least we can hope that some much-needed refereeing, ruling and VAR changes are made ahead of next season.