Danny Welbeck of Brighton & Hove Albion is challenged by Harry Maguire of Manchester United in the box  (Image: Photo by Oli Scarff - Po...

Pundits Alan Shearer and Ian Wright agreed that Brighton should have been awarded a penalty against Manchester United on Sunday.

With the game finely poised at 1-1 in the 70th minute, following goals from Danny Welbeck in the 13th minute and Marcus Rashford just after the hour mark, the Albion striker felt he was brought down by Harry Maguire in the box.

The former United forward Welbeck couldn't quite reach Neal Maupay's precision pass across the six-yard box and Brighton's players screamed at Mike Dean for a penalty to be given.

The referee decided against awarding it and it came to nothing following a VAR review.

Then the Seagulls were made to pay for their below-par second-half display as Mason Greenwood headed home to give the Red Devils all three points.

After the game, head coach Graham Potter said he thought the spot-kick should have been given.

And it appears former England strikers Shearer and Wright agreed with him.

When asked on Match of the Day 2 if it was a penalty, the ex-Newcastle striker said: "Yes, we agree on that.

"Harry Maguire was the wrong side of [Danny] Welbeck, you can see him desperately trying to get back and he puts him off - there was enough there to stop him. "

Wright added: "If he doesn’t touch him, Welbeck probably taps it in. He crumbles down and impedes him.

"He did what you do when you’re out of position and fighting to get back. He did enough to put him off and I think it was a penalty."

Potter said the fact that Mike Dean didn't award it was key in terms of the VAR review.

"When it was live, I thought it was a penalty [on Welbeck] then I suppose it's the clear and obvious debate," he said.

"If Mike Dean had given it, I don't think VAR would have overruled it. There's nothing we can do in the end. We're disappointed to come away with nothing."

Brighton remain six points clear of the relegation zone and have a game in hand on 18th-placed Fulham with eight matches remaining.

Next up they face Everton at the Amex on Monday, March 12. 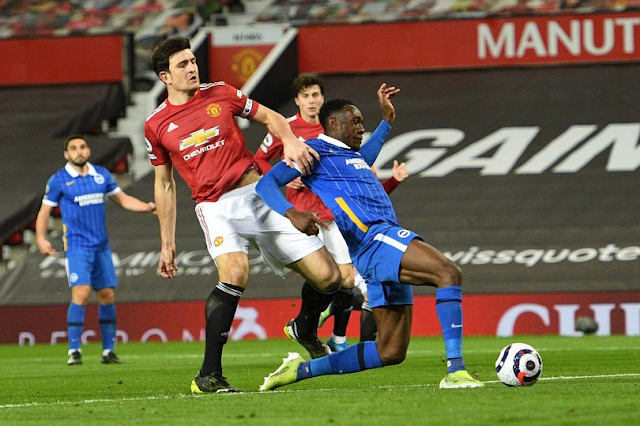