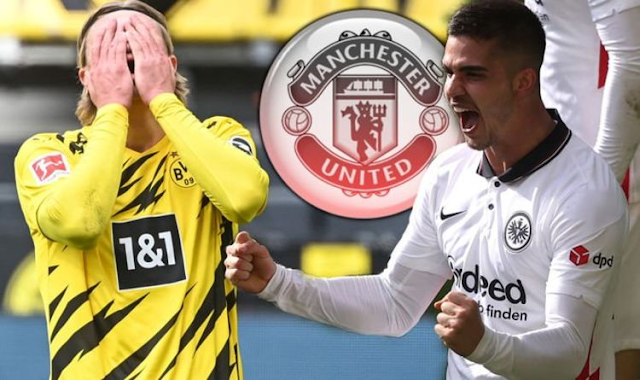 Andre Silva is 'very likely' to leave Eintracht Frankfurt this summer as Manchester United continue to be linked with the Portugal international. Silva has scored 23 goals in 26 Bundesliga appearances so far this season, two more than Borussia Dortmund sensation Erling Haaland.

United are in the market for a striker, with Edinson Cavani's future in doubt.

Cavani has scored in back-to-back matches for the Red Devils but sees his contract expire at the end of the season.

Dortmund star Haaland is at the top of United's wishlist, though there is plenty of competition for the Norwegian's signature from top clubs across Europe.

La Liga giants Real Madrid and Barcelona, as well as Premier League rivals Manchester City and Chelsea are also keen on the 20-year-old.

A cheaper and more viable option for United would be Silva.

German outlet Bild claim that it is likely Frankfurt will cash in on the 25-year-old following his fine season in front of goal.

That fee is considerably less than the £156.3m (€180m) Dortmund reportedly want for Haaland.

He spent last season on loan with the German side, scoring 16 goals in all competitions.

Silva started his career at Porto before joining Milan in 2017.

He made just 41 appearances for Milan and also had a spell on loan at Sevilla for the 2018/19 season.

Meanwhile, Cavani is heavily linked with a return to South America at the end of the season.

United boss Ole Gunnar Solskjaer wants to keep the Uruguayan and says a decision is yet to be made.

“We’ve had up front and honest meetings," Solskjaer said

"It’s no secret we want to keep him. I don’t think it’s any secret too that this has been a difficult year for everyone.

“With the pandemic it’s not been possible to have friends over, family over without quarantine. You can’t travel.

"He’s not been able to experience the fantastic culture in Manchester and in and around England, and he is contemplating and thinking hard and long about what he wants to do and I understand.

“He knows what we want; I want him in Old Trafford when it’s full, Stretford End scoring a diving header like today. There’s no better feeling, so let’s wait and see.”