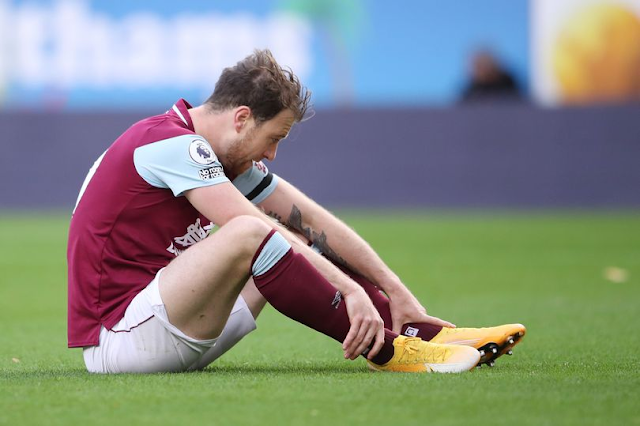 Burnley travel to Manchester United in the Premier League on Sunday

Burnley boss Sean Dyche hopes to see Ashley Barnes fit before the end of the season as the Clarets striker continues his recovery from a thigh problem.

The frontman has not featured since scoring in the 1-1 draw with Fulham in February and has suffered a couple of setbacks on his road to recovery.

He has returned to light training and has joined in with first team warm-ups as he builds his fitness.

Barnes suffered a hernia problem last year which required an operation and sidelined him for 10 months and Dyche admits his current problem was more serious than first thought.

"He was actually playing with it but it was a sore one and because he was playing with it we didn't really understand how damaged it was. And when he had a scan on it, it was quite a big tear so it's a longer period of recovery," said the Clarets chief.

"He's had a couple of minor setbacks along the way, so he's been very unfortunate, and that's sometimes how it hits players over a career - Robbie Brady has been unfortunate, Johann (Berg Gudmundsson) has had his fair share.

"They are diligent pros who look after themselves but sometimes your body is not quite in the balance it needs to be to stay strong.

"He (Barnes) is a strong character so I'm pretty sure he'll come through it. He looks more alive in himself at the moment. He's just getting involved with us, not training fully, just getting around the group and that will do him and us good."

On whether the striker might return before the end of the campaign, Dyche added: "I hope so. I wouldn't put a timescale on anything at the minute because every time I have done that this season it's kicked me in the rear!

"There have been so many times this season I thought we'll be back to just about a full compliment next week and then we're not and we've got another five injuries.

"I was hoping after the last three weeks of the break, I was very confident we'd have more or less everyone back and we haven't. We've got more injuries again. It's been one of those, a real head scratcher, and a real challenge, no two ways about it."

Along with Barnes, Burnley remain without Brady and Kevin Long while Dwight McNeil and Nick Pope are doubts.

The latter missed the defeat to Newcastle United with a shoulder injury and although he has returned to training a late decision will be made while McNeil picked up a knock on Wednesday and will be assessed.

"Popey is touch and go," said Dyche. "We will have a call on that one. He has made good progress this week.

"Dwight just got a knock in training on Wednesday and we thought it had settled down (on Thursday) but it was a bit sore (on Friday) so we will see on him."