Bayern vs PSG: What's changed since the 2020 Champions League final?

Bayern Munich face Paris Saint-Germain in the Champions League quarter-finals on Wednesday, in a re-run of the 2020 final.

Die Roten came out on top last summer thanks to a second half winner from Kingsley Coman - a player PSG let slip through the net back in 2014.

Since then, a lot has happened in both Bavaria and Paris. Some of it has been good, some has been bad, but if you are anything like us you have probably forgotten most of what has transpired. That's why we have compiled a handy guide to everything that has changed at each club since they last met back in August 2020.

Which players have left?

Bayern saw several prominent names depart after the final. Most notably, Thiago Alcantara brought a highly successful seven-year spell with Die Roten to an end, signing for Liverpool where things have not gone quite as well since.

They have also lost a handful of rotational options. Loanees Ivan Perisic and Philippe Coutinho, who both came on as substitutes against PSG, returned to Inter and Barcelona respectively, while several less known players named on the bench have departed on loan.

Elsewhere, backup striker Eric Maxim Choupo-Moting continued his trend of failing upwards, securing a move to none other than Bayern.

Which players have joined?

Bayern highest profile arrival since the final, aside from the irrepressible Choupo-Moting, is Leroy Sane. After a lengthy courting process, Sane finally secured a move to the Allianz Arena in the summer and has got off to a solid start, returning eight goals and 11 assists in 35 games. Douglas Costa has also returned on loan from Juventus to further strengthen the Bayern cause going forward.

Although not technically a new signing, Wednesday night will see PSG get their first taste of the ludicrously talented Jamal Musiala. The Germany international has been elevated to the first team by Hansi Flick this season and he has rewarded this faith with a string of impressive performances.

By their own cartoonish standards PSG had a quiet summer in terms of outlay, but they still brought in several new players. Their midfield has been strengthened with the additions of Rafinha and Danilo Pereira, while Sergio Rico was brought in as a backup goalkeeper.

One of their more surprising but successful transfers was signing Moise Kean from Everton on loan. Since arriving in Paris he has managed 15 goals at a rate of one strike every two games.

By the time last year's final came around Bayern were on to complete a treble, while PSG were going for a quadruple. This season, neither club has managed to match this domestic dominance.

Bayern's hopes of completing another treble were ended by second tier Holstein Kiel in January, who knocked them out of the DFB Pokal on penalties. Die Roten have also had a few Bundesliga setbacks, although they are now top the table by seven points.

PSG's fall from grace has been far more stark. Although they have already won the Trophee des Champions and remain in the Coupe de France, their Ligue 1 form has been worrying. They currently sit second, three points adrift of Lille with seven games left to play. Monaco and Lyon are hot of their tail as well.

In Bavaria, treble winning supercoach Flick remains in charge and this is unlikely to change anytime soon, unless he is tempted to take the Germany job when Joachim Low departs after Euro 2020.

For PSG, things have changed. After relations with the board became strained Thomas Tuchel was binned off over Christmas, with former Tottenham boss Mauricio Pochettino airlifted in. Since arriving his record has been mixed.

For every impressive display, like their first leg victory over Barcelona, there has been a worrying one. Their recent defeat to Lille is a prime example. As a result there is already a fair amount of pressure on Pochettino going into Wednesday's game. 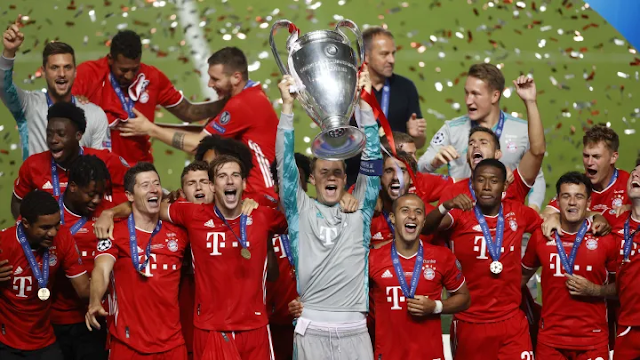