Ole Gunnar Solskjaer has managed to fit the two Man Utd attacking midfielders in the same team, more often than not.

Bruno Fernandes said he gets on really well with Paul Pogba at Manchester United, and believes he is benefitting from playing alongside him.

How Fernandes would link up with fellow star midfielder Pogba was a huge point of intrigue after the Portuguese's arrival at United in January 2020, as the pair didn't play together until June — due to Pogba's injury and the covid-19 lockdown.

But both Pogba and Fernandes have starred for Ole Gunnar Solskjaer's side this season, as United have risen up the Premier League table and look set to finish second.

Fernandes was asked in a Q&A with United fans, published by the club's in-house media, how he gets on with Pogba on and off the pitch at Old Trafford.

He said: “So, my relationship with Paul since the beginning, as I met Paul already in Italy, I already know him with much, much relation but, of course, we have a good relationship.

"I think, on the pitch, there is still to come the best for both of us. We can do much better together. I think we are doing better now because people and players are concerned about who they might mark – we have Paul Pogba and Bruno Fernandes in the same places, the same pockets.

"Sometimes it is difficult for players to find who to mark and who to give freedom and so it’s good for the team. That is the best for us because we know we can help the team playing together. I think when you play with the best, your best comes out also.

"For me, playing with Paul, it’s playing with one of the best players in the world. So I think the best of me comes out and it’s helped me to have those kind of qualities."

Fernandes also revealed he is close to fellow midfielder — and Portuguese-speaker — Fred at United, as he spoke about the games the players enjoy in down-time together.

He added: "And the good thing is, out of the pitch, we have really, really good relations now with perudo, the game we all play in the team. It’s getting better, the connections with the team, because when you have those kind of connections, it doesn’t matter whether it’s a game of cards, perudo now, and ludo is the one I sometimes play with Fred.

"I think it’s really good for us and the team. You know, sometimes, it’s just five or six of us playing but the rest of the team is watching and saying don’t put that, put this or don’t say that, say this.

"That’s good for the spirit of the team and it’s really good. I think Paul is one of the players who has a good spirit, good moments in the dressing room. He’s a really funny guy and can always have something good to say to make people laugh.” 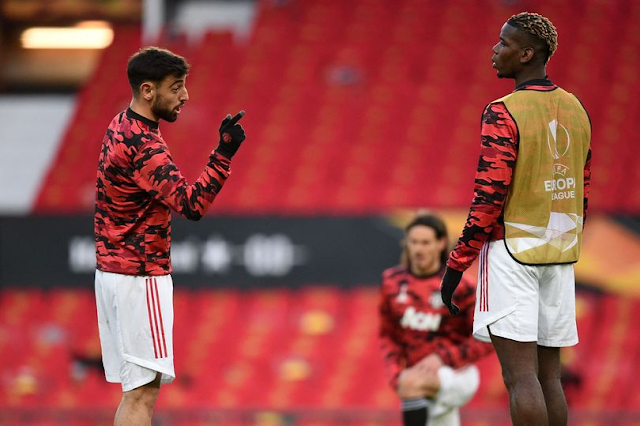