West Ham United continued their incredible surge towards the Champions League with a 3-1 victory against Leicester City to usurp Liverpool and Chelsea.

With vice-captain Declan Rice watching on from the stands and Michail Antonio recovering from a hamstring injury, it was Jesse Lingard who once again proved to be the catalyst for the Hammers.

In front of the watching England boss Gareth Southgate, Lingard hit a sweet half-volley which span past a stoic Kasper Schmeichel to open the scoring at the London Stadium.

Playing in front of Mark Noble on his 400th Premier League appearance, the Manchester United loanee was then on hand to tap into an empty net after Jarrod Bowen latched onto a long ball over the top and squared it unselfishly as Schmeichel advanced.

With James Maddison, Ayoze Perez and Hamza Choudhury missing from the squad entirely, Foxes boss Brendan Rodgers had limited options to call on from the bench at the break and it soon got worse.

West Ham pressed the visitors high up the pitch and it proved beneficial yet again as Arthur Masuaku pounced on a loose ball and found Lingard on the edge of the box, poked it round to Tomas Soucek and he then found Bowen in the box to smash it in the back of the net.

It could have been a hammering just before the hour mark when Issa Diop headed home from Lingard’s cross, but VAR correctly ruled the strike out after the linesman had failed to spot his move into an offside position.

Rodgers tried desperately to salvage the situation by throwing on Marc Albrighton in the hope he could supply Jamie Vardy with a chance to end his 17-game goal drought.

Leicester did manage to find a consolation goal through Kelechi Iheanacho after a mistake from Masuaku gifted the in-form striker a glorious opportunity from 18 yards out, which he duly seized.

The Hammers, who led 3-0 against both Arsenal and Wolves before conceding in their previous two fixtures, then gave themselves another nervy finish when Iheanacho smashed home his second after a great cross from Albrighton.

Yet the Hammers managed to stand firm and David Moyes could well be leading the East End outfit into the Champions League for the first time in their history.

With Newcastle United away their next game and arguably the most favourable run-in of all the teams gunning for Europe’s premier competition, the Hammers could well be facing the best on the continent next season. 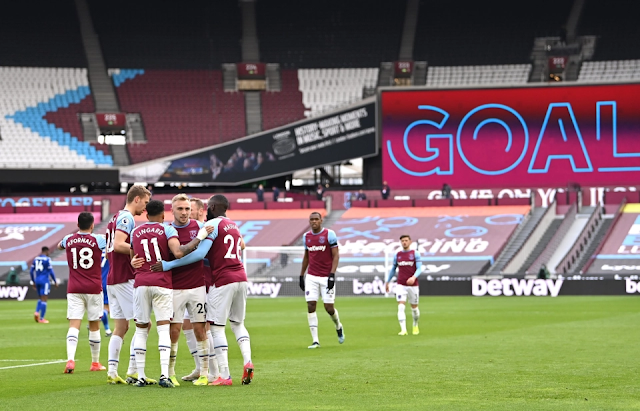