According to ESPN, Barcelona are investigating lines of credit that would make a transfer swoop for in-demand Borussia Dortmund superstar ... 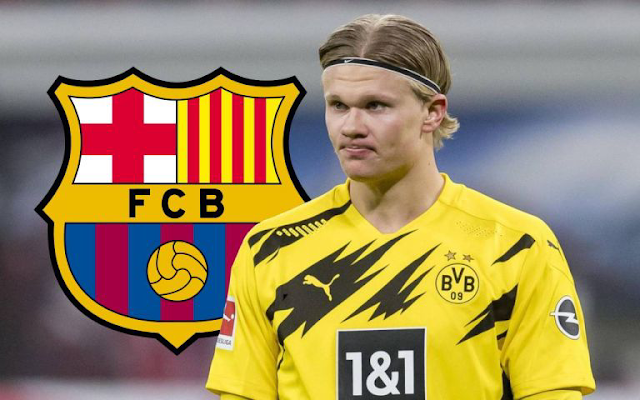 According to ESPN, Barcelona are investigating lines of credit that would make a transfer swoop for in-demand Borussia Dortmund superstar Erling Haaland possible.

The Blaugrana held initial talks over a deal for the prolific 20-year-old earlier today, as part of two-and-a-half-hour discussions with the striker’s agent Mino Raiola, as well as father Alf-Inge Haaland.

ESPN report that the meeting was held with newly crowned president Joan Laporta and soon to be director of football Mateu Alemany. Raiola and Alf-Inge had a talk with Real Madrid straight after.

It’s noted that Barcelona also used credit to fund the transfer of Antoine Griezmann in the summer of 2019, with the Frenchman who has endured a fairly difficult spell costing the side €120m, per BBC Sport.

The finances don’t seem to be in Barcelona’s favour but there are some pretty considerable chips that are, as ESPN report Laporta and technical secretary Ramon Planes enjoy a good relationship with Raiola.

ESPN report that Laporta sees Haaland as a key strategic signing, as the Norwegian sensation would strengthen the team for at least a decade, whilst his arrival would prevent him being with a rival club.

It’s added that heated foes Real Madrid feel that they’d hold the edge over the Catalans owing to their better financial situation, whilst a move to the Bernabeu certainly appears attractive to the star.

In yet another dismal sign of how the club’s transfers have played out in recent years it’s reiterated that former sporting director ruled out a move for the centre-forward before he left RB Salzburg for BVB.

ESPN even note that the recruitment of Haaland would help convince all-time great Lionel Messi to renew his contract, which expires this summer.