Speaking ahead of Chelsea’s trip to the London Stadium to take on West Ham, Thomas Tuchel has discussed the threats that the Hammers pose.... 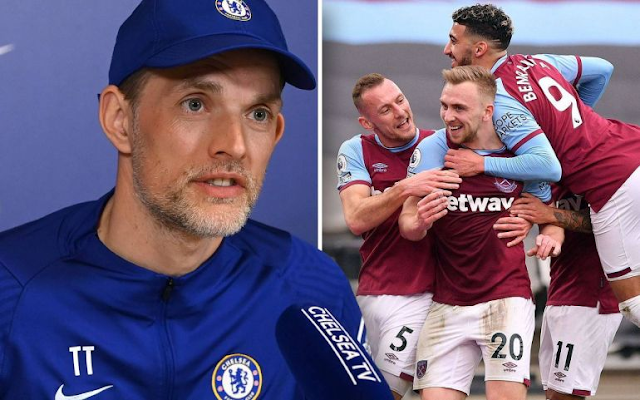 Speaking ahead of Chelsea’s trip to the London Stadium to take on West Ham, Thomas Tuchel has discussed the threats that the Hammers pose.

Chelsea sit in fourth place in the Premier League heading into the contest, despite having dropped points against Brighton at Stamford Bridge earlier in the week.

Ensuring that they will be playing Champions League football next term is very much in their hands, but today’s clash with the Hammers could prove to be a defining fixture.

West Ham have been one of the surprise packages of the season, with David Moyes’ men very much in the top four conversation, even with so few games left on the calendar.

And of course, we cannot neglect to mention the impact that Jesse Lingard has had since joining on loan from Manchester United back in the January transfer window.

West Ham are genuine challengers, and Tuchel knows it. Speaking about today’s opposition in his pre-match press conference, the Chelsea boss is quoted by Football London saying:

“I expect from them that they fight in a sporting way to be in the top four. They have had an extraordinary season. The team news is there is no new news. Mateo is still out, everyone else is available. The good news is we are now totally focused on the game, no other subjects, motivations, demotivations out there.”

“We expect a tough match. West Ham are a team that is very strong, relies on counter-attacks, relies on their solidarity and discipline in defence, which is the basis for very dangerous counter-attacking side, which they are. They are relying on set-pieces which is a real threat. So the challenge is clear.”

“We have to control the match, reduce ball losses, close the spaces intelligently before counter-attacks can start, and give away as few set-pieces as possible. That’s the plan. There are a lot of things to do and it’s a big challenge.”

All of West Ham’s brilliance this campaign to date has led to this moment. If they lose today, it could have all been for nothing. With the stakes so high, this promises to be an absolute cracker.