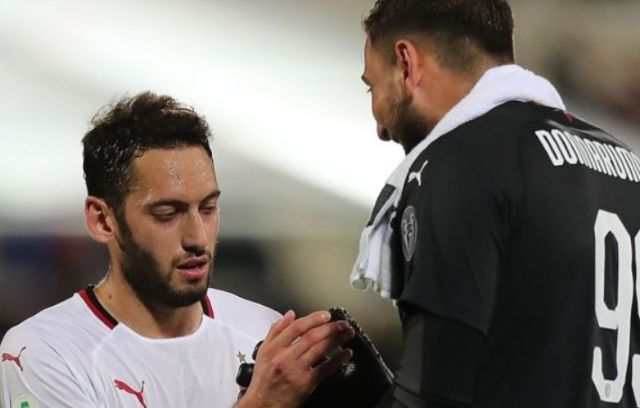 According to Milan News via La Gazzetta dello Sport, AC Milan superstar Gianluigi Donnarumma has received a mammoth contract offer worth €12m net a year from an unnamed club.

It’s reported that the Rossoneri have put a bid of €8m-a-year on the table, believing this is the best they can do, but Donnarumma’s bargaining position has been further strengthened by a bid from elsewhere.

In financial terms that phrase is usually used when describing a fee after deductibles are accounted for, like tax, Donnarumma and controversial agent Mino Raiola have themselves a mighty offer.

Eurosport report that Chelsea remain keen on the 22-year-old, with the Blues ready to jump at the chance to recruit the Italian if he hits the free transfer market, despite their recent keeping investments.

Manchester United are also named as suitors for the Italian star, with the Red Devils reported to have held talks with Raiola over a transfer already, as we’ve covered via the Transfer Window Podcast here.

It’s suggested that the Rossoneri understandably want to tie Donnarumma, the stopper they’ve used in the first-team since the age of just 16, to a long-term contract, Raiola has other ideas though…

Gazzetta dello Sport report that Raiola wishes for a shorter deal for his client, though securing Champions League qualification could make their difficult task slightly easier.

The Italian publication also believe that the unnamed club that have already offered a lucrative proposals are Paris Saint-Germain, based on some clues they’ve felt out like the age of their Keylor Navas.

Donnarumma will be one of the most sought-after free agents in recent history if he hits the open market this summer, no stopper around his age boasts remotely near the level of experience he has.

Considering the Italy international’s age and obvious quality, he could be a first-choice goalkeeper for one of the world’s biggest clubs for touching 15 years if he wishes to play that long.