Porto manager Sergio Conceicao has shared that he was ‘insulted’ by Chelsea boss Thomas Tuchel after his side bowed out to the Blues in th... 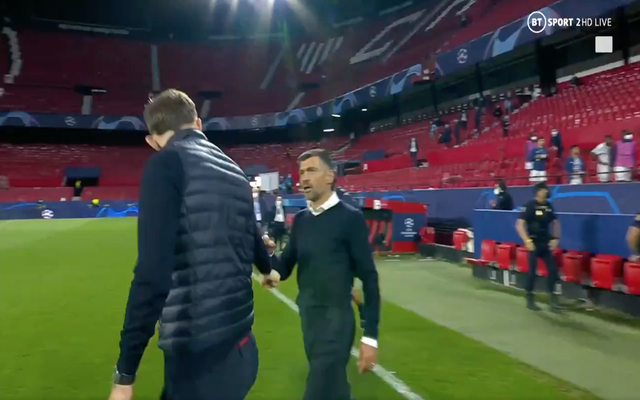 Porto manager Sergio Conceicao has shared that he was ‘insulted’ by Chelsea boss Thomas Tuchel after his side bowed out to the Blues in the Champions League quarter-finals this evening.

Conceicao made the shock claims in the post-match interview following Porto’s 1-0 second-leg win, thanks to a Mehdi Taremi stunner that came too late to cancel out the 2-0 deficit of the first meeting.

46-year-old Conceicao told TVI, as cited by newspaper O Jogo that the apparent war of words wasn’t related to the penalty shout on Evanilson, who was grappled around the waist by Antonio Rudiger.

The video evidence also suggests that there was friction between the opposing managers, as Conceicao was jawing at the German after the pair fist bumped immediately after the full-time whistle.

That frosty exchange can also be seen here, via TVI and Eleven Sports.

Will they reach Istanbul? 🇹🇷

Here is what Conceicao had to say on Tuchel, per O Jogo via TVI:

“It wasn’t like that [the words didn’t have to do with the alleged penalty].”

“I was insulted by this man next door [Thomas Tuchel]. I told the referee that the fourth referee heard the insults.”