Mason Mount scored a fantastic opener in Seville (Picture: Getty Images) Chelsea picked up a huge 2-0 win over Porto in the first leg of t...

Chelsea picked up a huge 2-0 win over Porto in the first leg of their Champions League quarter-final tie on Wednesday night in Seville, in which, crucially, the English side were the away team.

Mason Mount and Ben Chilwell were the goal-scorers and, although it was far from easy for the Blues, they have come away with an ideal result.

There was not a huge amount between the teams over the contest, with Chelsea predictably having the lion’s share of possession but the Portuguese side creating more opportunities.

It was a moment of supreme quality that broke the deadlock after 32 minutes, though, as Mason Mount scored his first Champions League goal.

The 22-year-old received a perfectly weighted pass from Jorginho on the edge of the penalty area, expertly spinning away from his marker and firing past Agustin Marchesin, who possibly could have done better.

In doing so, Mount became the youngest player to score a Champions League knockout stage goal for Chelsea.

Porto came back into the game impressively in the second half and looked the more threatening for much of the second stanza, but it was Chelsea who scored the second and final goal of the match.

Christian Pulisic had just hit the crossbar when the west Londoners doubled their lead in the 85th minute as Ben Chilwell proved an unliekly goal-scoring hero.

The England left-back pounced on some poor control from Porto’s Jesus Manuel Corona and charged in on goal, rounding Marchesin and finishing into an empty net.

It was a beautifully composed bit of forward play from the defender who gave his side a lead that will be very difficult to overcome with two away goals to their cause.

Chelsea’s strength in depth was demonstrated by the likes of N’Golo Kante, Olivier Giroud, Christian Pulisic and Thiago Silva all coming off the bench to help secure the big victory.

The second leg will be held in the same stadium in Sevilla next Tuesday when Chelsea will be the ‘home side’. 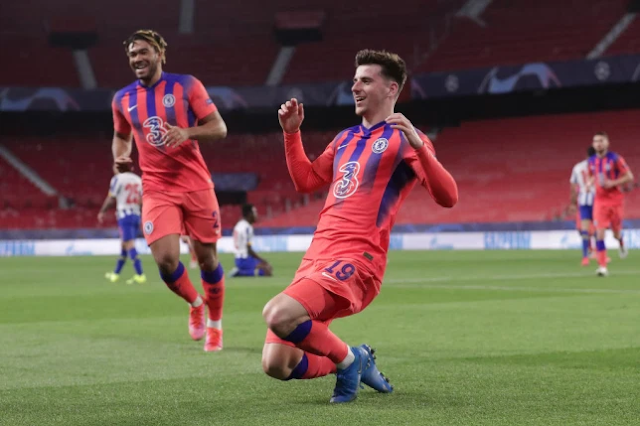