Ngolo Kante of Chelsea in action against Atletico Madrid. (Photo by Mike Hewitt/Getty Images) The team news is in from Seville as the Blue...

Thomas Tuchel has made three changes to his side for Chelsea’s second leg of their quarter final against Porto in the Champions League from the side that beat Crystal Palace on Saturday.

A win in Seville this evening will see Chelsea qualify for the semi finals of the Champions League for the first time since 2014, when they were knocked out by Atletico Madrid in the last four.

Tuchel's men hold a 2-0 advantage heading into this evening's game in Spain. Mason Mount and Christian Pulisic both found the net in the first match six days ago in the same stadium, which was Porto's "home" game, with Chelsea the home team this evening.

In midfield, Mateo Kovacic misses out through injury he is believed to have sustained in training on Monday night and is replaced by N’Golo Kante from the weekend win at Crystal Palace. Jorginho lines up alongside the Frenchman in Tuchel’s midfield pivot.

Kai Havertz once again leads the line for the Blues in a false nine role. On his left hand side, Christian Pulisic starts once again having netted a brace against the Eagles. Mason Mount, unsurprisingly, also starts as part of the front three.

Timo Werner, Olivier Giroud and Hakim Ziyech are all among the substitutes in Seville.

At the back, Edouard Mendy starts in goal as expected and the back five in front of him also remains in tact once again.

Ben Chilwell and Reece James will be the two wing backs with the latter replacing Callum Hudson-Odoi from the weekend win. As usual, the lineup includes three central defenders of Cesar Azpilicueta, Antonio Rudiger and the returning Thiago Silva from suspension, with Andreas Christensen and Kurt Zouma both missing out. 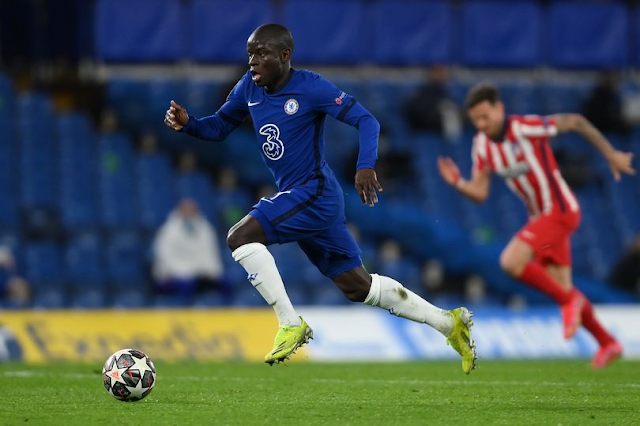