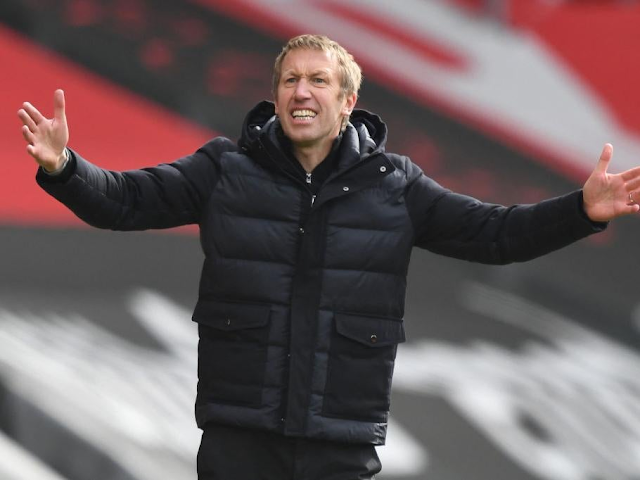 Brighton and Hove Albion will be without two key defenders for Sunday's Premier League trip to Manchester United.

Defender Adam Webster has been sidelined with an ankle injury sustained during a hard-fought 1-1 draw at Burnley in February, while Dan Burn looks set to miss out with a hamstring injury sustained at Southampton.

The international break was expected to give Webster time recover but the former Bristol City man has been ruled out of the match at second placed United at Old Trafford.

"Making progress," Potter said of Webster. "He's not yet joined the group. It's looking more hopeful for the Everton match. But still a couple of weeks away."

Striker Aaron Connolly could however be in contention having recovered following an injury picked up on international duty. "Aaron has trained today," said Potter. "We will see how he responds but there is a chance he will be involved.

"He had a rib injury before but he also had a foot problem. It was a heavy contact, with bruising rather than a break or a fracture, but he's trained and feels better."

Percy Tau is in quarantine after representing South Africa during the international break and Tariq Lamptey (hamstring), Solly March (knee) and Florin Andone (knee) remain out.

Albion will go in search for their third consecutive Premier League win, having recording victories in their last two outing against Southampton and Newcastle.

Man United at Old Trafford will however be a stern test for Potter's team as Ole Gunnar Solskjaer's men are second in the Premier League and will be keen cement their place in the top four.

Brighton have worries of a different kind. Despite some impressive displays this season Albion remain involved in a relegation tussle and are six points above 18th placed Fulham.

Albion were also desperately unlucky not to take anything from the reverse fixture earlier this season when Man United netted a controversial 100th minute winner from the penalty spot.

It was a crazy match that saw Leo Trssard hit the wood work three times for Albion, Neal Maupay net a Peneka penalty, Marcus Rashford fire home a belter and a decider from Bruno Fernandes in the 10th minute of stoppage time.

"I was so proud of the players in how they played in that game," said Potter. "It was 2-2 and we deserved the 2-2. When you analyse it, we did many things well in that game. It's the first time in my career I have conceded a goal after the final whistle."