Man United are seven points clear in second after winning 3-1 against Tottenham thanks to Edinson Cavani's winner. Edinson Cavani prod... 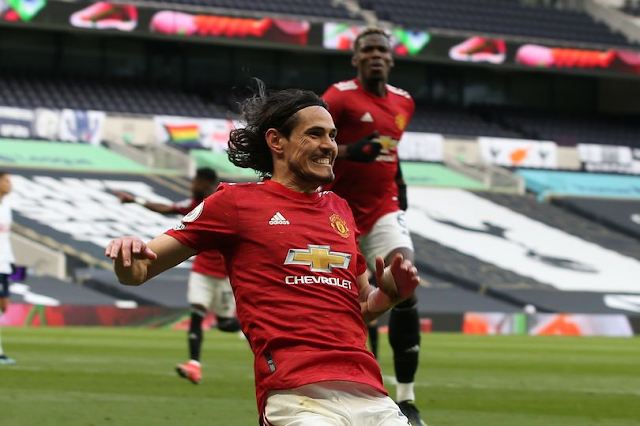 Man United are seven points clear in second after winning 3-1 against Tottenham thanks to Edinson Cavani's winner.

Cavani nodded in the winner in United's 3-1 comeback win over Tottenham for his eighth goal of the season amid uncertainty over his future.

The 34-year-old had a goal dubiously disallowed in the first half at the Tottenham Hotspur Stadium and in the second drew two saves from Hugo Lloris before he beat the French goalkeeper.

Cavani also played a key role in Fred's equaliser as United went seven points clear in second and to within 11 points of Manchester City, with a game in hand. The Uruguayan now has more goals than United's official number nine, Anthony Martial, despite starting nine fewer games.

"Fantastic performance," Solskjaer said. "I've said a couple of things about Edinson today that we are waiting for his decision, whether he wants to stay or if he wants to move on.

"A performance like today we, as a club, have missed for a few years. We haven't had that type of number nine for a long, long spell and Edinson has been working so hard to get fit and now he's getting a couple of games in a short space of time.

"We’ve had upfront and honest meetings [about Cavani's future]. There’s no secret we want to keep him.

"I don’t think it’s any secret that it’s been a difficult year for everyone not been possible to have friends and family over and without quarantining you can’t travel. He’s not been able to experience the fantastic culture in Manchester and England and he is contemplating and thinking long and hard about what he wants to do and I understand. He knows what we want.

"I want him at Old Trafford while it’s full at the Stretford End scoring a diving header like today there’s no better feeling, so let’s wait and see."

Solskjaer felt Cavani's 36th-minute goal that was chalked off at 0-0 jolted United, who were meandering through the game until the Video Assistant Referee controversy and trailed to Son Heung-min's goal at half-time.

"I think from that moment onwards we played some very, very good football," Solskjaer opined. "I know we conceded a goal after that but they came together, they weren't going to let a decision like this derail our season.

"A strength in the team and character in the team is to come together in difficult moments and we've done that many, many a time this season."