Man Utd beat Granada 1-0 at Old Trafford to reach the Europa League semi-finals and for the second game in a row Edinson Cavani was on the scoresheet.

As Edinson Cavani watched the ball carefully fall towards his left foot in the Granada penalty area there were probably members of the La Liga side wondering just how one of Europe's best goalscorers over the last decade had found that much space so early in the game.

The 34-year-old made no mistake from the dropping ball, even if the finish came off his shin it was angled perfectly into the bottom corner. While Granada might have been frustrated at the ease of the concession, Manchester United players have become accustomed to seeing Cavani become the master of space in the penalty area.

Here he slipped away from his marker, pausing his run into the box to find room to be found by a clever header from Paul Pogba. Cavani really is the master of movement.

That was his only real chance against the dogged La Liga side and it said plenty about his instincts in front of goal that he took it to reach nine for the season for United. After looking out of sorts against Brighton a couple of weeks ago he has been back to his best against Tottenham and Granada.

United are still waiting on Cavani's decision over his future, but they will be keeping everything crossed that he decides the temptation of a season playing in front of a packed of Old Trafford is too much to resist.

It's already clear that this decision could make or break United's summer. If they go into the transfer window with an elite No. 9 signed up for another season then the pressure is off, to a degree. If Cavani has opted for a return to sunnier climbs then securing a striker this summer becomes a top priority. Closing the gap at the top of the table will be impossible without it.

The idea of Pogba captaining United again looked far-fetched in December, when Mino Raiola made public just how little enjoyment the Frenchman was getting out of life at Old Trafford.

But his performances since mid-December have been consistently impressive and Pogba has been outstanding in recent weeks, looking every inch United's outstanding player.

How much we should read into the decision to hand him the armband is debatable, but there were plenty of United fans willing to interpret it as a sign he was ready to commit his future to the club.

What is most important for Ole Gunnar Solskjaer at the moment is the quality of his performances and while he only played 45 minutes against Granada he was excellent once again, setting up Cavani's goal with a superb backward header in the penalty area, showing great awareness and dexterity to claim the assist.

Solskjaer praised Pogba's "personality and character" after naming him captain and he's been effusive in the way he's talked about the midfielder recently. Whether this ascension to the captaincy in the absence of Harry Maguire is a one-off or a more telling sign will become apparent by the end of the summer.

For the fifth time in the previous two seasons United are into a semi-final in a cup competition. United have now reached the last four in successive League Cup and Europa League campaigns, while they followed up last season's FA Cup semi-final with a quarter-final this time, before a disappointing exit to Leicester City.

Solskjaer's talk of trophies as an "ego thing" made headlines recently but if United keep making themselves a fixture at the business end of competitions then silverware will surely follow.

The Europa League certainly feels like a very winnable competition. What the previous four semi-finals under Solskjaer have in common is that they all ended in defeat. That is a run that has to end sooner rather than later before the burden becomes intolerable.

United have been handed a tricky last four draw in Roma, but over two legs they will feel it is a winnable tie. A trophy for this group of players could help them take another stride forward next season and in Europe they have the ideal opportunity to make sure the drought without a new addition to the Old Trafford museum doesn't reach four years.

Will Fish was clearly keen to show Solskjaer he was ready for action, warming up in shorts during the first half while his colleagues on the bench opted for tracksuit trousers as temperatures began to drop in Manchester.

The 18-year-old would have been desperate to catch the eye having been handed this unexpected chance, but even just being on the bench and training with the first team this week will be an invaluable experience for the young centre back.

United might not have wanted to be participants in the Europa League after Christmas this season, but it has at least allowed them to give some experience to academy graduates.

Fish became the 14th different academy graduate to make a matchday squad under Solskjaer this season. The United manager has great faith in the work being done below the first-team and he's happy to reward the best of those players with some first-team exposure.

Cavani's early goal should have left Granada dispirited but if they were beaten at that stage they either didn't plan on accepting their fate or didn't want to go quietly.

This was a match that quickly turned into a bruising affair, with challenges from both sides flying in. United can mix it in that regard and while Pogba was unfortunate to be booked for an immense show of strength when he shrugged off several markers in the centre circle, he was pushing the limit a few minutes later with a late challenge and it was a sensible move to withdraw him at half-time.

Referee Istvan Kovacs was averaging 5.5 cards a game so far in the 26 games he'd taken charge of this season and he could probably have got close to that number in the first half alone. 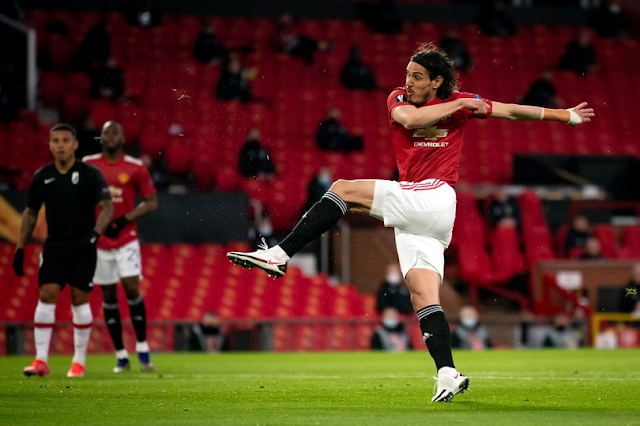