EXCLUSIVE: UNITED CHECK OUT THE PITCH AT GRANADA

The Manchester United squad have been photographed enjoying the sun at the Estadio Nuevo de Los Carmenes, hours before our Europa League q... 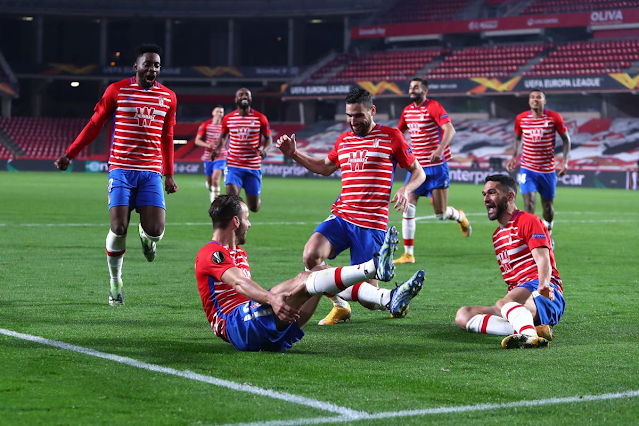 The Manchester United squad have been photographed enjoying the sun at the Estadio Nuevo de Los Carmenes, hours before our Europa League quarter-final with Granada kicks off.
Ole Gunnar Solskjaer and his men were given the opportunity to get used to the surroundings at Los Nazaries' home ground, ahead of what will be our first-ever meeting with the La Liga side.
As you'll see when browsing through our exclusive snaps below, the conditions in Andalusia, at the southern end of the country, couldn't be better with the mercury currently approaching 20 degrees Celsius.

Assistant boss Mike Phelan was certainly enjoying visiting a new venue, and it's a welcome return to Spain for the Reds, who of course couldn't travel to San Sebastian to face Real Sociedad earlier in the competition due to COVID-19 regulations.

That game instead had to be played in Turin, where we ran out 4-0 winners over the Basque outfit.

A repeat of that scoreline in Granada - or even the narrow 1-0 success in Milan three weeks ago which secured progress to this stage - would be most welcome tonight, but Solskjaer is under no illusions as to the ability of the hosts.

“They’ve had a very long season but an exceptionally good one as well,” noted Ole in our pre-match interview. “They got promoted two years ago, played in La Liga, got seventh and qualified for Europe for the first time and they’ve played something like 46 or 47 games all season already [in all competitions] – I think only Tottenham have played more competitive games than them this season.

“They’ve had a great season and we know we’ll meet a team with an attitude, desire, experience and a team spirit that is better than many, many teams. We know that when you get promoted and you get those results it is team spirit that will keep you going and their coach has been very impressive and the results they’ve got so far have been fantastic.”

Ole has selected a 24-man travelling party for the first leg, with Anthony Martial and Eric Bailly the notable absentees. Martial was injured on international duty, while Bailly has tested positive for COVID-19, although Juan Mata is back for the trip to his homeland.

Eighteen-year-old forward Anthony Elanga could make his debut after being drafted in and if you want to know more about the Sweden youth international, we've got you covered.

Whether the majority of the groundwork is laid tonight, or at Old Trafford in seven days' time, Solskjaer and his men are hoping to land a second successive Europa League semi-final berth - and a third in five years, after our 2017 success in this competition.

It's worth a reminder that Ajax or Roma are awaiting the winners of this tie, but let's not get too carried away just yet.

First and foremost, we'll need to see off a Granada side who have already beaten Sevilla, Valencia and Real Sociedad - among others - this season. Come on you Reds!