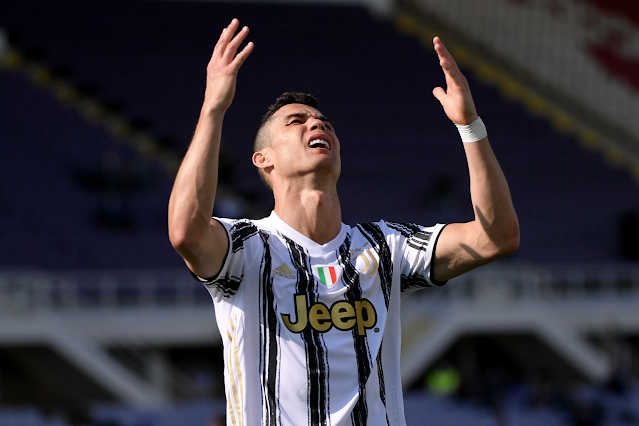 Portuguese super-agent Jorge Mendes has approached Manchester United and two other major European clubs about Cristiano Ronaldo according to TUTTOmercatoWEB.

The 36-year-old could be counting his final days in Turin following Juventus’ underwhelming season.

For the first time in a decade, the Bianconeri are set to miss out on the Serie A title as Antonio Conte’s Inter Milan close in on their first league crown since 2009/10.

Currently sitting level on points with fifth-placed AC Milan following a 1-1 draw at Fiorentina last time out, Andrea Pirlo’s men may not even finish inside the top-four.

Juventus’ hopes of securing a spot in Europe’s premier club competition are under imminent threat, which could pose a real problem in Fabio Paratici’s plan to keep his headline performer past the summer.

A thoroughly disappointing domestic campaign coupled with another premature Champions League exit has thrown Ronaldo’s future in Italy into a corridor of doubt.

The Portugal captain arrived at the Allianz Stadium to lead Juventus to their first Champions League title in the 21st century but has never managed past the quarter-finals during his three years at the club.

If the former Real Madrid talisman decides to leave the Serie A side at the end of the season, only a handful of clubs could afford his staggering wages.

One of those teams is United, who propelled Ronaldo to stardom and helped him establish himself as a household name in European football.

Well aware of the mutual affection, Mendes has approached the Red Devils chiefs to discuss the possibility of a reunion in the summer.

Although Ole Gunnar Solskjaer is overly enthusiastic about the idea of having one of the best players ever at his disposal, the financial aspect of the deal remains the stumbling block.

With the coronavirus pandemic putting the squeeze on United’s finances, the Old Trafford outfit can only sign the quicksilver forward if he accepts to take a significant pay cut.

Ronaldo currently earns €31million per year at Juventus, while United can offer him an annual package worth €15m.

Recent reports have suggested that the Madrid all-time top-scorer is willing to lower his wages to return to Manchester.

However, it is uncertain whether he would reconcile with throwing away 50% of his current salary.

Conclusively, United remain the only viable top-flight destination for Ronaldo if he severs ties with Juventus this summer.