Leeds 0-0 Manchester United:  There were few chances on a day when the visitors faced obdurate opposition, on the pitch and in the skies P... 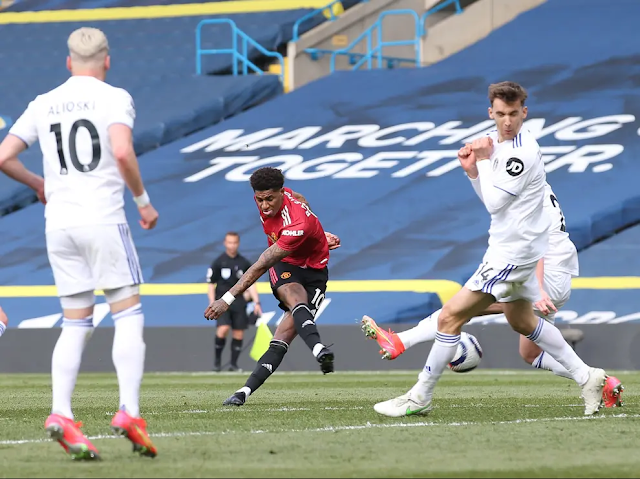 Leeds 0-0 Manchester United: There were few chances on a day when the visitors faced obdurate opposition, on the pitch and in the skies

Perhaps the title race ended when Manchester City’s 10 men won at Villa Park on Wednesday, perhaps as Manchester United’s inability to win at Elland Road left them 10 points behind their neighbours with five games to play. If Leeds cost the other United the last Division 1 title in 1992, it might be an exaggeration to say this was a sequel, even if they did extend their unbeaten run against European Super League clubs in Yorkshire this season.

But it was a day when Manchester United faced obdurate opposition, on the pitch and in the skies. For inveterate entertainers, Marcelo Bielsa’s Leeds have a steely side and have shared stalemates with Arsenal, Chelsea and now Ole Gunnar Solskjaer’s side. Meanwhile, a plane flew over Elland Road, displaying the message “£2 billion stolen – Glazers out.” United’s owners have been remarkably obdurate in ignoring their critics for 16 years, though. Perhaps, as second place had long beckoned for them, displays of defiance changed little, though United missed the chance to equal Solskjaer’s best winning run in the Premier League. Instead, there was no sixth successive triumph, even if their unbeaten away record was rarely under threat.

This was both an open game and yet one with relatively few chances. Perhaps, after a 6-2 that contained 43 shots in their previous meeting, anything else was bound to be an anti-climax but there was certainly no repeat.

Solskjaer looked to use much of the gameplan that brought December’s pyrotechnics, packing his team with quick runners and looking for them to get the ball forward early. Marcus Rashford scuffed a shot wide after Victor Lindelof’s ball over the top. Manchester United seemed to sense that Rashford had the ability to evade Luke Ayling. When the right-back did collide with him, it brought a booking as both chased Harry Maguire’s long pass.

Rashford posed a second kind of threat and Illan Meslier excelled to save a swerving free kick but United felt overly dependent on a player whose injury problems means he rarely completes 90 minutes.

Bruno Fernandes fired a shot wide after Aaron Wan-Bissaka wriggled clear to cross but the Portuguese, who led Kalvin Phillips a merry dance in December, was less influential in their rematch. Mason Greenwood had four goals in the previous three league games but his scoring run ended, though he drilled a shot at Meslier after an unusually perceptive pass from Fred.

Paul Pogba was benched as Daniel James started against the club he almost joined in 2019 but United missed the craft of the Frenchman, who will surely return against Roma on Thursday.  It was telling that Solskjaer did not send for Pogba until the 76th minute or Edinson Cavani until the 86th He was settling for the draw.

Leeds had scored dramatic late goals against City and Liverpool in their previous two games but were more muted on a day when they missed the injured Raphinha. Jack Harrison appealed for a penalty when his cross struck Luke Shaw and Helder Costa’s shot looped up off Aaron Wan-Bissaka to land on the roof of the net but their only shots on target were tame efforts.