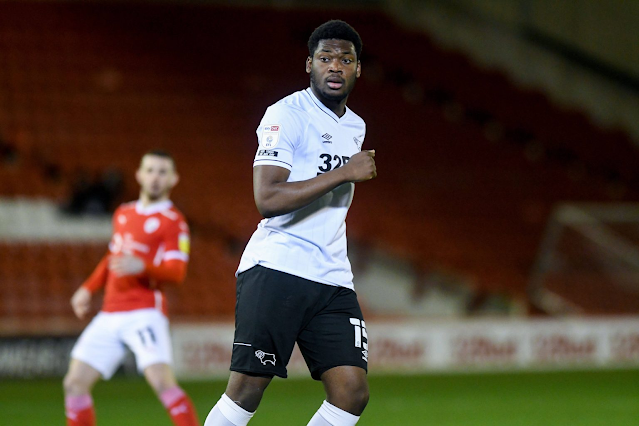 According to The Athletic, Manchester United loanee Teden Mengi has returned to the club after suffering a season-ending injury while out at Derby County.

Managed by Wayne Rooney, the youngster joined the Rams on loan last January. In his first spell of regular football at the senior level, Mengi did well enough to leave an impression at Pride Park.

The 18-year-old returns to United having made nine first-team appearances for Derby. But he was on the winning side just twice.

“Mengi will miss the rest of the season and go back to Manchester United from today.”

Speaking to the press, Rooney confirmed that Mengi is on his way back to United. Thankfully, the injury is not serious and he will hopefully make a quick comeback ahead of next season.

“The injury isn’t too serious but he won’t recover in time to play again.”

Prior to his loan exit, Mengi had been training regularly with United’s first-team squad. He made his debut in the Europa League against LASK last season.

It is unfortunate that his shot at regular first-team football has taken a massive setback.

A race against time?

It was revealed earlier this month that Derby had an agreement in principle to take the player on loan next season. While the injury plays spoilsport, Rooney has hinted that Derby will be in touch with United regarding next season’s plans.

Despite him returning earlier than expected, one can call his spell at Pride Park a successful one. Both Rooney and Mengi have spoken about each other in glowing terms.

Despite the Red Devils’ problems at the back, Mengi is not the solution. He still has much to do before he establishes himself as a regular in the first-team at Old Trafford. Another spell out on loan will do him good.