Manchester United defender Luke Shaw says he 'can't be compared to Roberto Carlos' after he was given the nickname 'Shawbe... 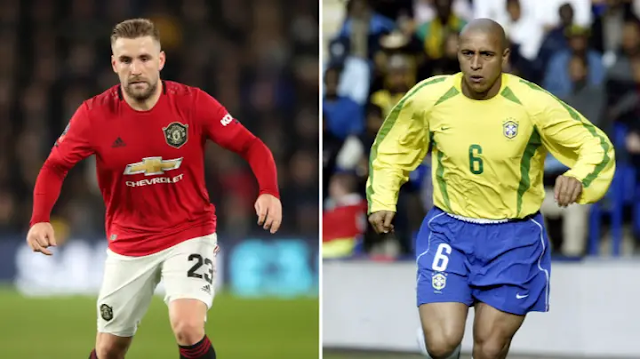 Manchester United defender Luke Shaw says he 'can't be compared to Roberto Carlos' after he was given the nickname 'Shawberto Carlos' by fans.

The 25-year-old has established himself as the club's first choice left-back after a string of consistent displays.

In fact, the England international will certainly be in the running for United's player of the year award come the end of the season, with a recent masterclass against Spurs a highlight.

That feeling when Luke Shaw stops playing with your brain and becomes of one of the league's top, most consistent performers pic.twitter.com/cDFOeEh2lX

A leg break in 2015 meant that Shaw's development was halted and, following intense criticism from former manager Jose Mourinho, the defender struggled to get the minutes he needed to rediscover his form of old.

As we've seen on plenty of occasions this campaign, however, Ole Gunnar Solskjaer has given him a run in the team, with the full-back relishing those opportunities.

So much so that he has been compared to Roberto Carlos by fans.

Roberto Carlos has posters of Luke Shaw in his bedroom

Which Left-Back is better?

Retweet for Roberto Carlos
Like for Luke Shaw #YouBeChampion pic.twitter.com/IuE34Oy54N

Meanwhile a humble Shaw isn't too sure about the 'Shawberto Carlos' nickname.

"I'll be honest I've seen some things on it on social media and sometimes in my group chats my mates send me some stuff and I just laugh about it!" Shaw told ManUtd.com when asked about the comparisons.

"I can't be compared to him, he was unbelievable!

"I'm aware of it and it's nice to be even mentioned alongside his name, but I just laugh about it!"

It's very disrespectful to compare Roberto Carlos to an all time great like Luke Shaw https://t.co/cSzyobl7nu

In fact, he named Cole the best player of all time in his position.

"I think, looking back at when I was growing up and my sort of era, and watching him a lot and basing my game a lot on him and what I wanted to be like as a player, then I would have to say Ashley Cole [was the best]." he said.

"I've always been a massive fan of him and thought, when I was growing up, he was one of the best left-backs at that time.

"For me, as an all-round full-back he was one of the best I've ever seen with attacking and defending, so I'd say Ashley Cole."

Thoughts on Luke Shaw being compared to the great Roberto Carlos?

Let us know in the comments.