The European Super League may already be over, but the rage against that specific machine is still burning. Manchester United officially w... 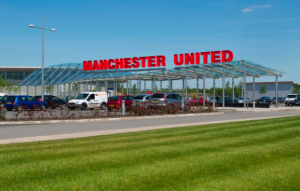 The European Super League may already be over, but the rage against that specific machine is still burning. Manchester United officially withdrew from the Super League in less than 48 hours after it was announced, but the widely reviled proposal stirred up more backlash against the Glazer family that owns the club.

The Glazers actually apologized, in a statement issued by the club/open letter to fans, but it did nothing to quell unrest against them. About 20 fans actually breached security at the Carrington training complex today for the purpose of displaying banners that read “51% MUFC 20,” “We decide when you play” and “Glazer out.”

The first slogan is in reference to the 50+1 club/fan ownership model, in which supporters hold a majority of the voting rights. It is quite commonplace in Germany.

Local police were called as fans got past the reception area and into the training pitch. United manager Ole Gunnar Solskjaer, staff members Michael Carrick and Darren Fletcher, along with midfielder Nemanja Matic went to speak with the supporters who then left Carrington. This is according to Sky Sports.

No one from United has spoken of the incident yet, aside from this very short statement issued by the club:

“At approximately 9am this morning, a group gained access to the club training ground. The manager and others spoke to them. Buildings were secure and the group has now left the site.”

Unhappy Manchester United fans broke into the club's training facility to protest MUFC's owners and their involvement in the Super League. 😳 pic.twitter.com/ZklTtoS9zX

United CEO Ed Woodward resigned this week, amidst the ESL backlash, and this news was met with rejoice by many of the club’s supporters. This development also emboldened more members of the United community to speak out and call for the Glazers to sell the club.

Solskjaer has yet to do a single media availability during “the Super League era,” but he will have his first post ESL media opportunity tomorrow, when he holds his weekly session in advance of the club’s Sunday fixture against Leeds United.