Borussia Dortmund are confident they can prevent Erling Haaland leaving even if they don't qualify for next season's Champions League.

Borussia Dortmund sporting director Michael Zorc is confident Erling Haaland will continue to play for the club next season even if they fail to qualify for the Champions League.

Dortmund won 2-0 on Tuesday night against Union Berlin to stay four points behind Eintracht Frankfurt with four matches of the Bundesliga season to go.

They face Wolfsburg, five points ahead in third, and second-placed RB Leipzig - who sit on 61 points compared to Dortmund's 52 - in their next two matches.

Mainz, who are 13th, and then sixth-placed Bayer Leverkusen round off the campaign as temporary manager Edin Terzic faces a testing finish to the season.

It has been suggested that if Dortmund fail to qualify for Champions League football next season, they could be vulnerable to bids for Haaland.

The 20-year-old striker has scored 35 goals and laid on 10 assists in just 36 appearances this season and overall at Dortmund has 51 strikes in 54 matches.

The Norway international, who has six goals in 10 caps, has been a revelation for the German giants since joining from Red Bull Salzburg for around £18million in January 2020.

Now, the Dortmund striker is valued at seven times that amount with a price tag of around £130million on his head going into the summer transfer window.

Haaland is available for £64m in 2020 due to a release clause in his contract but Manchester United, Manchester City and Chelsea are among the clubs who could make bids this summer.

But Zorc is hopeful that even if Dortmund miss out on Germany's top four, they can keep hold of Haaland.

"We have made our position clear on the Haaland case," the Dortmund chief told Sky Sport Germany.

"The decision will not be made without Borussia Dortmund. No matter where we end up, Erling will continue to play for us."

That follows previous comments from Zorc in which he said: "I like to stick to what the contractual basis looks like and how the direct discussions were held last week.

"We have very clear plans to go into the new season with Erling."

United are eyeing Haaland as the long-term successor to Edinson Cavani, who has impressed as the Red Devils' centre-forward this season while Anthony Martial has struggled.

While City will lose Sergio Aguero on a free transfer at the end of the season and Haaland has been identified as an ideal long-term replacement to the Argentine.

At Chelsea, the out-of-favour Tammy Abraham is the top goalscorer with just 12 goals all season and the Blues want a new marksman to supply the goals for a title pursuit next term.

Speaking last week, Haaland's agent Mino Raiola insisted that Dortmund do not want to part ways with the prolific striker.

Raiola and Alf-Inge have held meetings with Barcelona and Real Madrid about a potential switch, with the interest of the Premier League trio also well known.

Raiola told German television channel Sport1: "I can confirm that I've been in Dortmund.

"I respect it but it doesn't mean that I agree [he should stay]. There is no war between me and Dortmund." 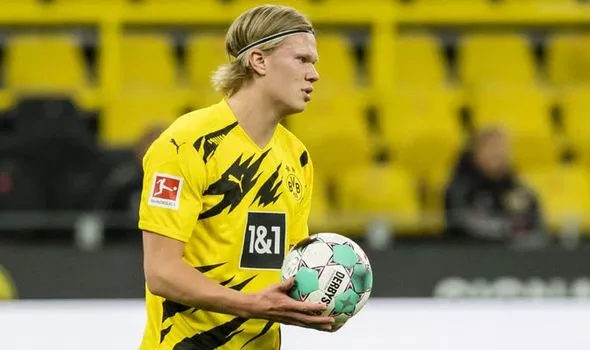