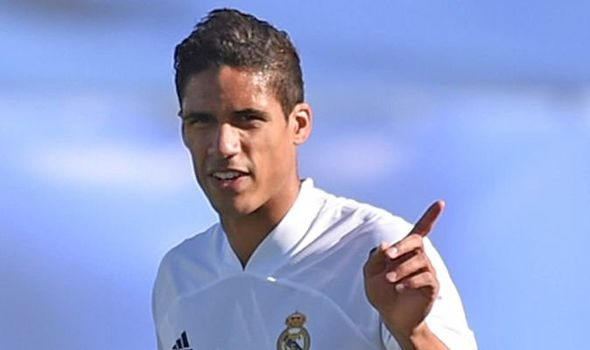 Manchester United are reportedly in advanced talks to sign Real Madrid star Raphael Varane. Interest from the Red Devils in the centre-back is nothing new, with the club eyeing his signing as far back as Sir Alex Ferguson’s spell in charge. And, now, that could be about to become a reality.

But the Norwegian knows his side required more tightening at the back if they’re to win the Premier League title.

United have moved closer to Manchester City at the summit but still require improvement, with Lindelof and Maguire often blowing hot and cold.

As a result, they’re eyeing Varane.

Reports have suggested the France international’s move to Old Trafford is at an ‘advanced stage’ ahead of the summer transfer window, with Real Madrid willing to sell.

Yet United won’t be able to give him his dream shirt number.

When Varane moved to the Bernabeu from Lens back in the summer transfer window of 2011, he was initially given the No 2 shirt. While happy with that, it wasn’t his favoured option.

Instead, the Los Blancos star wanted the No 5 jersey instead. It’s a special one to him, having been worn by Zinedine Zidane during his time as a Real Madrid player.

After Zidane retired, Real struggled with players wearing it on their back.

Fabio Cannavaro never lived up to expectations at the Bernabeu, while Fabio Coentrao failed to do it any justice either.

But Varane has gone from strength to strength ever since inheriting it, helping Real win the Champions League twice since swapping numbers.

At United, it’s currently worn by Maguire. And, given the England international’s importance to the side, it’s unlikely he’ll give it up anytime soon.

So with the Red Devils looking likely to sign Varane, they’ll have to look at other options instead.

Victor Lindelof wears the No 2 jersey at Old Trafford but No 3 could soon become vacant if, as expected, Eric Bailly leaves the club at the end of the campaign.

No 6 may become available should Paul Pogba depart, with the France international yet to sign a new contract amid interest from former side Juventus.

And United could even give Varane the No 15 shirt made famous by Nemanja Vidic throughout his time with the Red Devils, with Andreas Pereira primed to be sold.

Meanwhile, speaking in 2011, the Los Blancos centre-back admitted he was swayed to Real by Zidane - despite talking with Ferguson about a potential move.

“Zidane called me and I asked him to call me back because I was studying for my baccalaureate,” he said.

“It’s my relaxed nature that made me react like that. You have to be care-free to deal with so many things at such a young age.

“But to be honest, after that call, my mind was elsewhere; it was hard to focus on revising!

“It was the craziest period of my life: I was getting ready for the baccalaureate, the phone was ringing off the hook, I visited the Real facilities, I met Alex Ferguson… Just imagine, I was doing exams and signing autographs for other students.

“It was surreal. I’m really proud of having passed.”

Five years later, he then revealed interest from United was ‘flattering’ and described them as a ‘big club’.

"Of course it's flattering,” he said. “Manchester United are a very big club.

“But from the moment when Madrid and I are in sync on my project, there's no questions to ask yourself.

"I have always said I feel good in Madrid.

“It's not easy to say 'No' to Jose Mourinho, but you have to weigh up the pros and the cons. We're men, we have decisions to make and that's how it is."