United's pursuit of Haaland could be aided by Cavani staying at Old Trafford  (Image: GETTY) Edinson Cavani is widely expected to leav...

Edinson Cavani is widely expected to leave Manchester United at the end of the current campaign.

Manchester United's interest in Borussia Dortmund star Erling Haaland has to be among the worst-kept secrets in football at present. The Red Devils are likely to be in the market for a top-class striker this summer, and have reportedly identified the 20-year-old as their priority target.

Haaland has established himself as one of the world's best players since joining Dortmund from Red Bull Salzburg in January of last year.

His career once had the potential to play out very differently, with United coming agonisingly close to securing his signature ahead of Salzburg back in 2019.

Despite missing out on Haaland as the result of simple error, with club chiefs failing to take into account the time difference between England and Norway when making a crucial phone call, the Red Devils appear determined to continue their pursuit and could go back in for his services in the coming months.

However, the possibility of funding a successful approach for the forward appears to be uncertain, with Dortmund only willing to consider bids matching their reported £130million asking price.

It would make better financial sense for United to wait until the end of next season, when a cut-price fee of just £64m would be required to activate his release clause, but this would rely on the likes of Real Madrid, Barcelona and Manchester City failing to sign him this summer.

Ole Gunnar Solskjaer admitted earlier this week that Cavani's immediate future is still yet to be decided, but the Norwegian boss indicated that his preference would be for the striker to remain at Old Trafford for at least one more year.

"He knows my view, he knows I'd love to see him play in front of the Man United fans at Old Trafford," Solskjaer told reporters when quizzed on the situation.

"It will be the year when we can get the fans back in and it's important that he makes the decision not with anything else in mind. He wants a successful end to the season and that might sway him because he knows I love working with him, the boys really love having him around."

If Cavani has a change of heart between now and the end of the season, it would allow United to use the upcoming transfer window to address other areas in need of improvement.

Solskjaer is known to be in the hunt for a new centre-back, and with Haaland's pursuit delayed until the summer of 2022, the 48-year-old could push to sign Villarreal's Pau Torres, Real Madrid star Raphael Varane or Jules Kounde of Sevilla without the need to hold on to his budget for the Dortmund man.

The striker's team-mate Jadon Sancho is another long-term target, and is likely to be available for a reduced fee this summer after the Red Devils baulked at the prospect of meeting his nine-figure price tag during pre-season.

United have, like many elite clubs across Europe, been hit hard by the COVID-19 pandemic but should see a boost in revenue upon the return of capacity crowds at Old Trafford.

This would put the club in a stronger financial position ahead of next season, with Haaland likely to demand a monstrous weekly wage.

It remains to be seen whether he will eventually join United, opt for their cross-city rivals, or take the opportunity to prove his world-class credentials alongside the likes of Lionel Messi in La Liga.

However, if Cavani ultimately decides to stay for another season, it could allow John Murtough, Matt Judge and Solskjaer to enact the perfect long-term plan with regards to finally landing the Leeds-born star next summer. 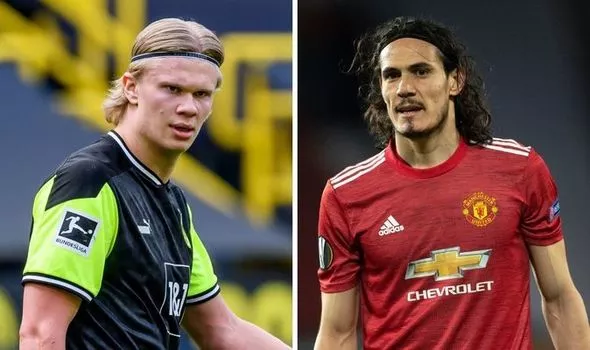