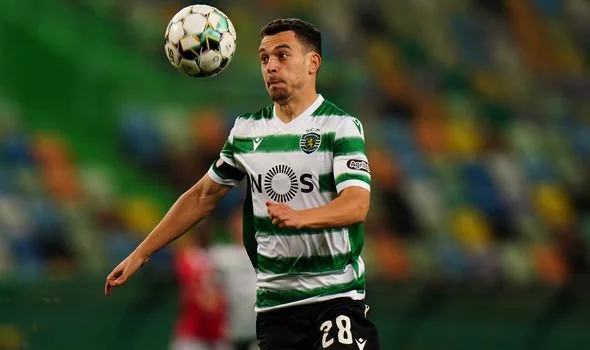 Manchester United have compiled detailed scouting dossiers on the man dubbed the 'next Bruno Fernandes', Sporting Lisbon's Pedro Goncalves, according to reports.

Fernandes has been a revelation at Old Trafford since joining in January 2020, contributing 35 goals and 21 assists in 67 appearances for the Red Devils.

But Sporting, who are unbeaten in the Primeira Liga and sit 10 points clear of second-placed Porto, have managed well without their former captain.

And key to their success this season has been attacking midfielder Goncalves, who has lit up Portugal's top tier.

The 22-year-old, who mainly plays as a No 10 but can also operate out wide, has mustered 15 goals and four assists in 22 league matches this term.

That is a marked improvement on his return of five goals and six assists in 33 league appearances last season.

Goncalves had a disappointing two year spell with Wolves in which he made just one first-team appearance but has come on leaps and bounds in his homeland.

The Portugal under-21 international, signed from Famalicao only in August 2020, has caught the eyes of clubs across Europe including United.

That's according to Eurosport, who say there are murmurs that the exciting attacker could play Premier League football next term.

United are said to have been putting together detailed reports about Goncalves' talents but Arsenal are also said to be admirers of the player.

The Gunners are keen to sign a new No 10 but their priority is to make Martin Odegaard's loan move from Real Madrid permanent.

And that could free up United to go for Goncalves, although they have Fernandes and Donny van de Beek who can play in the No 10 role.

Eurosport say playmaker Goncalves, also known as 'Pote', has a release clause of £51.7million in his contract.

That makes him slightly cheaper Fernandes, who left Sporting for United for an initial £47m, although add-ons in the deal mean United have paid £55m.

If Fernandes is named PFA Player of the Year this season, following 16 goals and 10 assists in 29 Premier League matches so far, then United will have to pay the Portuguese outfit another £4.2m.

Yet while the influential 26-year-old is a guaranteed starter whenever fit, Goncalves could still have a significant role to play if he were to head to Old Trafford.

The younger Portuguese's versatility means he and Fernandes could line up in the same team, while Van de Beek - signed last summer from Ajax - has been linked with an early transfer exit this summer.

Solskjaer admitted earlier this year that Van de Beek isn't entirely happy in Manchester, though insists he still has a role to play this season and in the campaigns to come.

"I wouldn't say that Donny is happy," the Norwegian coach said. "Of course, he wants to play more, but he gets about his job in the right manner.

"We are doing well and have got players who are playing really well in his position.

"He reminds me a lot about myself, when I first came in, that he understands my difficulties and challenges.

"I was the same with Sir Alex [Ferguson] When he left me out I understood and I was happy for the team to win – and Donny is that type of guy.

The £34million Dutchman, who has made just two league starts, is not expected to leave United despite speculation with the midfielder still only 23.

Yet his ability to play deeper means Goncalves could still be a target for the upcoming window, as United also look at the likes of Erling Haaland, Jadon Sancho and Raphael Varane.