Manchester United star David De Gea has been linked with a move away from Old Trafford ahead of the summer transfer window. Manchester Uni... 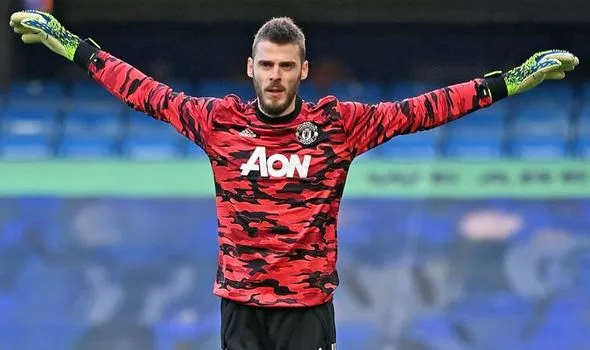 Manchester United star David De Gea has been linked with a move away from Old Trafford ahead of the summer transfer window.

Manchester United star David De Gea is a ‘prime candidate to be loaned out’ in this summer’s transfer window, reports say. The Spain international has fallen behind Dean Henderson in Ole Gunnar Solskjaer’s pecking order. And, as a result, an emotional parting of the ways may be on the cards.

He initially experienced teething problems upon moving to the Premier League, making early errors in matches against Manchester City, West Brom and Blackburn.

But, in the time since, De Gea has become a United legend.

Yet, now, talk of a move away is starting to gather momentum.

De Gea has fallen behind Henderson in Solskjaer’s pecking order, though is expected to start tonight’s Europa League showdown with Granada.

And ESPN say the 30-year-old is a ‘prime candidate to be loaned out’.

It’s stated that United may struggle to find a buyer for the veteran, who is their biggest earner on wages of £375,000-a-week.

They won’t want a player of De Gea’s size and stature to be sat twiddling his thumbs on the bench while Henderson is in the side.

So United could now loan him out should they find a team willing to pay part of the player’s salary.

Juventus have emerged as potential suitors, with the Old Lady seeing a drop-off in Wojciech Szczesny’s performances this term.

Indeed, the Poland international was recently dropped for Gianluigi Buffon. Andrea Pirlo clarified that decision by saying: “It was something I had already prepared.

“There has been criticism towards Szczesny after the last game and I told you he would play anyway.

“However, I had already talked to him, he was tired after having played many games, with his national team too. He needed a break to start again. He remains the Juventus starter.”

And PSG are in the mix as well, despite Keylor Navas enjoying a solid season at the Parc des Princes.

Meanwhile, speaking ahead of United’s crunch Europa League showdown with Granada, Solskjaer insisted he was happy to have both De Gea and Henderson at his disposal.

“David has had 10 fantastic years at Man United and he’s had challengers [before],” said the 48-year-old.

“Of course they want to play – Dean has given it his all because everyone wants that place in the team. David does as well and it’s a healthy competition.

“Goalkeeper departments are a very tightknit group. They work together in preparation, they have different gym sessions, individual sessions [to the rest of the squad], they stay together more.

“Naturally they create a bond and the spirit in the goalkeeping department has been top. But it’s a healthy competition.

“Both of them are important, all of them want to play.

“It’s the same for [the club’s other goalkeepers] Lee Grant, Nathan Bishop and Sergio Romero: they want to play and that’s a competition I like.

“David has been a top, top keeper and he still is. He’s working to be ready when he plays.

“If it’s Dean or David, I’m very comfortable with both of them and I’m very happy that none of them are happy to not play.”

“I don’t pick players when we know there’s a risk,” he said. “Marcus joined in training this [Wednesday] morning so let’s see how he reacts.

“If there’s any risk of making it worse I’m not going to overplay him.”