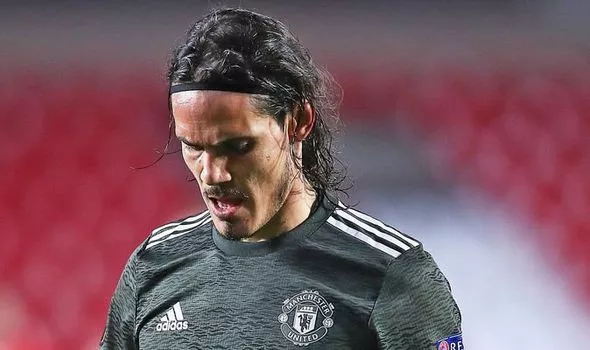 Manchester United boss Ole Gunnar Solskjaer has hinted there’s a possibility Edinson Cavani will leave Old Trafford. The Uruguay international only joined from PSG on a free transfer back in the summer. Boca Juniors want to bring the forward to South America and, now, that deal looks like it may happen.

Solskjaer insisted United were still in talks with Cavani on Friday, though worryingly admitted the striker was ‘unsure’ over his future.

“Yeah. I’ve kept in touch with Edi and of course we keep an open dialogue,” he said.

“He’s still unsure what he wants to do next season, which I find fine.

“It’s not been an easy year, either for him or the rest of the world this season, so he still wants time to make his mind up.”

So with that the case, Express Sport will now list four potential replacements for Cavani should he leave the club.

Everybody in world football wants to sign Erling Haaland.

And, with the Norway international scoring 31 goals in the Champions League and Bundesliga combined, it’s easy to see why.

United were rejected by the 20-year-old in the January transfer window of 2020 but interest still remains.

Any deal won’t be straightforward to broker with rivals Barcelona, Real Madrid, Chelsea and Manchester City also in the hunt.

But United will fancy their chances given Solskjaer’s close connection to his former Molde pupil.

Harry Kane has been a shining light amid a difficult campaign for Tottenham.

Solskjaer praised the England international on Friday, saying: “When you play against one of the best centre forwards in European football, it is something that we prepare for and I think every team when they play Tottenham or England, you know Harry Kane’s qualities, but we prepare the defenders for every single opposition and opponent.

“You know the season that Son and Kane have had, the relationship they’ve had.

“Of course, that’s one of Tottenham’s strengths and they’ve got other quality players as well that we have to be aware of.”

But United can be forgiven for looking in his direction, with interest dating back to Louis van Gaal’s spell in charge.

Inter Milan owe United a payment following their signing of Romelu Lukaku in 2019.

And, with that the case, the Serie A giants may be forced into selling Lautaro Martinez despite his importance to Antonio Conte’s side.

Despite being in Romelu Lukaku’s shadow, Martinez has scored 15 Serie A goals and registered five assists so far this season.

He’s speedy, something Solskjaer likes in a forward.

But the Norwegian isn’t exactly going to come out and say he wants the Manchester City striker, is he?

United have signed veterans Cavani and Zlatan Ibrahimovic in recent years, with both players doing a good job at Old Trafford.

And Aguero could tread a similar path - while also being the perfect revenge following Carlos Tevez’s decision to cross the divide back in 2009.