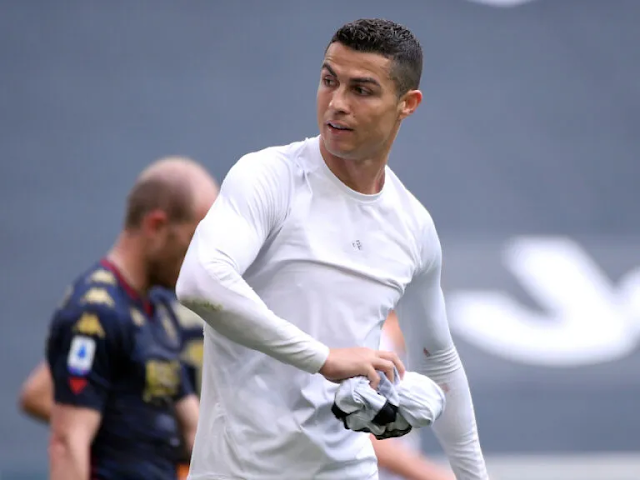 According to Calciomercato, Manchester United’s impending top-four finish could see them make an audacious bid to bring the Portugal star back to Old Trafford.

Cristiano Ronaldo, 36, was caught on camera throwing his Juventus shirt to the ground after their 3-1 win over Genoa on Sunday.

Apparently he was angry with the “lack of assistance” from his team-mates. Andrea Pirlo later claimed the shirt was a gift for a ball boy, but Calciomercato suggest there could be a deeper issue.

No Scudetto to celebrate this season and an early exit in the Champions League is also obviously a contributing factor.

The report says Juve would never ask Cristiano Ronaldo to leave, but they would also not oppose the player’s decision if he did want to move on.

United have been mentioned as suitors. The club where the 36-year-old made his name for six years.

The report claims United might even attempt to use Paul Pogba in a swap deal. Pogba has been in good form for United of late, but his agent Mino Raiola did hint at a transfer earlier in the campaign. Juve are also understood to be big admirers of their former midfielder.

The report claims a return to Real Madrid for Ronaldo is “difficult to see”. While Sporting are mentioned as a destination – a club where Ronaldo started his career.

The Portuguese side though would not be able to afford Ronaldo until 2022, when his current deal in Turin expires.

Last month Juventus vice-chairman Pavel Nedved said Ronaldo would see out his contract in Turin and will not be leaving the club beforehand.

“For me, Ronaldo can’t be touched,” Nedved said in an interview with DAZN.

“He has a contract until June 30, 2022 and will stay. What happens after that remains to be seen.”

Calcio are insistent that Cristiano Ronaldo has a decision to make and they claim the “moment of confrontation is approaching”. It appears down to Ronaldo where he will bring down the curtain on his illustrious career.

The club were recently said to have turned down a possible reunion last season. Nevertheless, Ole Gunnar Solskjaer’s comments appeared to leave the door ajar.