The Serbia international has been linked with all three clubs in the past. Sergej Milinkovic-Savic’s superb recent form for Lazio has resu... 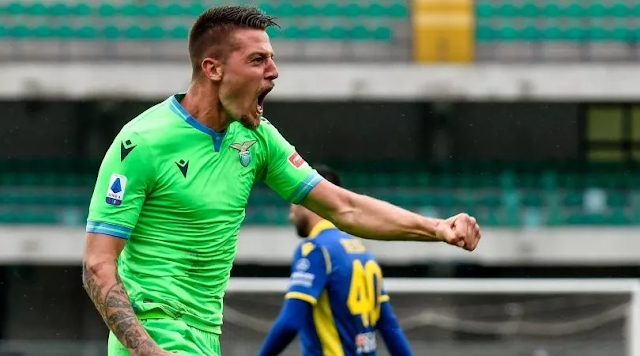 The Serbia international has been linked with all three clubs in the past.

Sergej Milinkovic-Savic’s superb recent form for Lazio has resulted in revived interest from Manchester United, PSG and Real Madrid, according to reports.

The Serbia international has been linked with the three European giants in the past after establishing himself as one of the top midfielders in Serie A.

Milinkovic-Savic headed home a stoppage-time winner against Hellas Verona on Sunday to keep Lazio in the hunt for Champions League qualification.

It was his seventh league goal of the season and the 26-year-old has also produced nine assists, making this his most productive campaign in front of goal for the Roman club, who he joined from Genk in 2015.

Gazzetta dello Sport reports that PSG, United and Real are ready to renew their interest in the Serbian, but much could depend on how the season concludes.

Lazio are currently sixth in the standings, six points outside the top four and a Champions League place, but with a game in hand.

The capital club’s chances of keeping Milinkovic-Savic, who has a deal until 2024 in Rome, would greatly improve if they can secure a second consecutive season in European football’s top club competition.

Lazio were undefeated in their group this season to reach the Last 16, where they were eliminated by Bayern Munich, and Milinkovic-Savic batted away talk about his future after his winner against Verona.

“I have a long contract. I’m not thinking about the future, but finishing in the top four with Lazio,” he said.